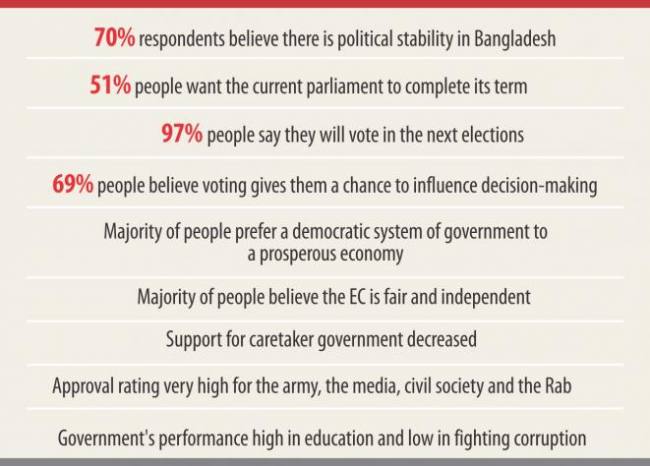 The majority of Bangladeshis believe that the country is heading in the right direction, according to a survey by the International Republican Institute.

Sixty-four percent of the respondents think so despite political instability and price hike of essentials. In November 2013, it was 33 percent.

The IRI’s Centre for Insights in Survey Research conducted the survey between October 30 and November 19 last year.

It shows that the respondents’ approval rating is very high for the army, the media, civil society and the Rapid Action Battalion.

Eighty percent of the respondents believe the country’s present security situation is good. Of them, 29 percent said it is “very good” and 51 percent “somewhat good”, according to the survey where 2,550 respondents aged 18 and above were interviewed.

Responding to another query, 70 percent people said there is political stability in Bangladesh, and 50 percent people believe it will improve in the year ahead, says the survey.

Thirty-four percent people strongly believe that the Election Commission is “completely fair and independent”, while 25 percent “somewhat agree” to this. Twenty-nine percent people said the opposite.

The number of people who think the caretaker government system should be restored before the next parliamentary polls fell to 68 percent in November 2015 from 77 percent in January 2014. And the percentage of those who don’t want it rose to 23 percent from 18 percent.

Asked to choose between a democratic system of government and a prosperous economy, 51 percent respondents opted for democracy while 46 percent chose prosperity.

A great majority of the respondents said the government’s performance in the field of education, healthcare and infrastructure development was high, but it was low in the field of fighting corruption and crimes and employment generation.

A great majority of the people, 79 percent, believe the country’s present economic condition is good. Only 19 percent people said the opposite.

The data was collected using a multi-stage stratified probability sample and through in-person, in-home interviews. The sample was stratified by the seven administrative divisions, 64 districts and by urban and rural locations, says the report.

The information in this report has been compiled in accordance with international standards for market and social research methodologies.