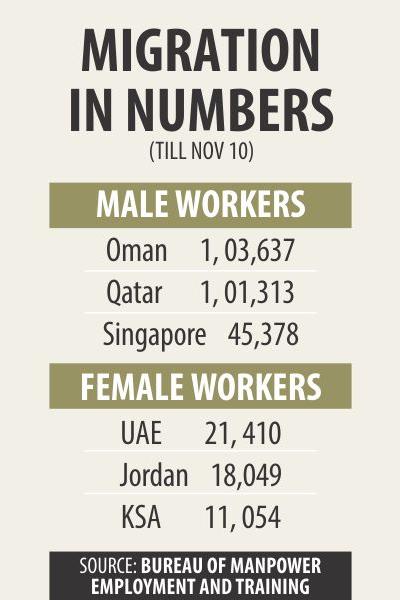 More Bangladeshi workers went abroad in the first 10 months of this year than the entire last year, government data show.

Over 4.5 lakh male and 90,000 female workers migrated to different countries until November 10, according to statistics of the Bureau of Manpower Employment and Training (BMET).

BMET Director General Begum Shamsun Nahar expressed her hope that they would be able to send over 5,00,000 male and 1,00,000 female workers abroad by the end of this year.

Officials at the expatriates’ welfare and overseas employment ministry said the demand for Bangladeshi workers – both males and females – in countries like Oman, Qatar, the UAE, Singapore and Jordan was going up every day.

Until November 10 this year, Oman has emerged as the country recruiting highest number of Bangladeshi male workers — 1,03,637 , show the BMET statistics.

Qatar is second on the list. It hired 1,01, 313 male workers during the same period.
ADVERTISEMENT

At least 45,378 Bangladeshis have migrated to Singapore, the third largest destination for the jobseekers, while 41,146 migrants went to Saudi Arabia during the same time.

The United Arab Emirates (UAE), which did not hire Bangladeshi male workers for three years, has become the largest recruiter of female workers this year.

It alone has hired around 21,500 Bangladeshi female workers until October.

Jordan and Oman are second and third on the list.

The ministry officials said there has been a boost in sending the country’s female migrant workers abroad, which actually started increasing in 2010.

Experts have hailed the uptrend in the number of migrant workers – both males and females. However, they said the government, in a bid to boost the manpower export sector further, must take some immediate steps to check the “difficulties” Bangladeshi workers face during their migration.

Quite often, recruiting agencies cheat them with false promises of lucrative salaries. Sometimes, they are exposed to forced labour abroad; sometimes they are beaten up for protesting. In many cases, the workers are verbally abused by their brokers as well as the foreign employers, said the experts.

“Cheating and human trafficking in the guise of migration are still prevalent in our country. These are the big issues that must be addressed to ensure safe migration for Bangladeshis,” said Syed Saiful Haque, chairman of WARBE Development Foundation, which works with migration.

Bangladeshi females are mostly working as domestic helps abroad while Indian, Sri Lankan and Nepalese women are working as maids and nurses, according to Bangladesh Ovhibashi Mahila Sramik Association (BOMSA).

“Our government must increase its vigilance to prevent abuses by those who hinder safe female migration abroad,” Sumaiya Islam, director of BOMSA, told The Daily Star. 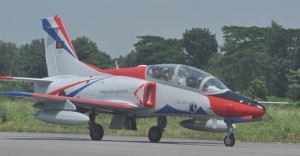