“I saw dolphins on my way to school this morning,” says 10-year-old Runa before her lesson on Bangladesh’s liberation war. She gets a lift to school in a small wooden fishing boat from her village on a slither of land in Brahmanbaria, 100km east of Dhaka, which flooding turns into an island for six months of the year.
“My village is very pretty with lots of green trees and small ponds, and it’s surrounded by water,” she says. “It’s getting smaller. It used to be dry but now there’s more water.”
Runa studies with 27 other pupils on a pink-and-blue passenger boat, decked out with paper flowers, vibrant wall displays and a flapping national flag. The floating school – one of 670 set up by Bangladesh-based NGO Brac – is just one of the ways in which the country is reaching out to its rural communities, which often have great difficulty accessing essential services such as education and healthcare, a situation worsened by climate change. 48 million people in Bangladesh live below the poverty line, and 70% of these are from rural areas.
In the remote coastal communities further south, declining fish stocks are driving wages down, forcing people to seek work in the cities. Gobindio Kumar Mondal, 27, leaves his wife and three-year-old daughter in Shyamnagar, south-westernBangladesh, for five months of the year to work in a brick factory, which pays more than labouring and fishing at home.
“All the men of my age in my village go to the brick factories,” he said. “There are agents who take people there. It’s a day and a half by bus. I miss my wife and parents but I have to go to earn the extra money. If my family needs anything while I’m away, I send the cash by mobile.”
Fisherman Jahangar Mohammad, who lives in Mongla port, in the country’s south-west, said: “The number of fish has seriously declined because there are more fishermen and some are using chemicals, which kills all the small fish. There are also big boats using fine nets. If the coast guard catches illegal boats, they fine them – but they don’t often catch them.”
Leading Bangladeshi economist QK Ahmad explained: “Some people do well at the cost of others. Shrimp owners take the land of poor farmers. There is great disparity between coastal areas and the rest of the country.”
Lack of healthcare provision in these remote communities is also a major issue. Ishwaripur community clinic in the south-western coastal district of Satkhira provides basic healthcare to 6,000 people despite the lack of electricity and meagre government funding. It is run by a dedicated team of community volunteers and health workers, and is supported by UK NGO Care. It focuses on immunising young children, nutritional support for under-fives and maternity services.
The health committee had to persuade local officials to pay for a tin shelter – its new waiting room – and lobbied for essential equipment such as surgical scissors. It also asked for a medical professional to be appointed to the clinic – a doctor now visits twice a month.
Prodap Shen is a community volunteer at the clinic, supplementing the work of government health staff. “I go household to household to tell people about hygiene and tell pregnant and lactating women to come to the community clinic for services,” he said. “Our staple food is rice so people may think rice will keep them in good health, but they also need vegetables and eggs. It’s an area we are really addressing but sometimes people don’t want to listen when you talk about food.”
The World Food Progra-mme says undernutrition costs Bangladesh more than $1bn in lost productivity every year, and even more in healthcare costs. Approximately 7 million children under five are chronically undernourished. Despite growth in wages over the past five years, food prices mean millions cannot afford a healthy, balanced diet.
Lack of employment opportunities and essential services in rural areas, exacerbated by rising sea levels and erosion, have caused a steady stream of migration to the cities. Dhaka has the highest population growth in the world,with 3.4 million people living in slums. Almost a third do not have access to sanitation.
The small and relatively well-served Peyarabagh slum has three bathrooms for the 170 families who live in single-room homes. Residents queue for more than 30 minutes to bathe and share three taps and 16 toilets.
Howa Begum, chairperson of Oxfam’s water and hygiene committee, moved to Dhaka from her village in central Madaripur district when she was a teenager after her family home was lost to river erosion. Over the past five years, the committee has persuaded the government to build a road, install communal water taps, and build toilets and washing facilities.
“Before, there was so much disease,” she said. “Now that we are taking precautions, disease has been reduced. I now clean vegetables before cooking and cover food from insects. It has changed my life.”
Back on the floating school near Brahmanbaria, Runa’s teacher, Runa Akter, emphasised that teaching standards are high in Brac’s informal schools. “I would have had to study for longer and sit government exams to teach at the madrassa,” she said. “But education here is better quality.”
The pass rate at Brac’s schools speaks for itself – last year, 99.97% of its studentsgained the primary school certificate (PSC), with 80.29% of students achieving an A grade.
“The class limit is 30 children and the demand is more than we can take – it takes a lot out of me,” Akter said. “But then there’s the feeling that some day a child will pass their exam and say, ‘I learned this from my teacher.’” 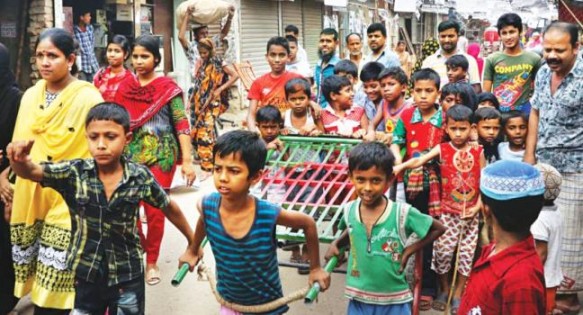