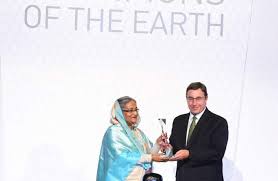 Country’s eminent personalities representing various social strata and public opinion on Monday highly lauded Prime Minister Sheikh Hasina for being awarded the ‘Champions of the Earth’ by the United Nations.

In a rare unanimity of expressing views they said that wining such a covetous international award would surely enhance Bangladesh’s image and dignity in the community of nations.
The Prime Minister has received the highest environmental accolade of the United Nations Environmental Programme (UNEP), the ‘Champions of the Earth’ award in recognition of Bangladesh’s far-reaching initiatives in addressing problems induced by climate change under her government.

UNEP Executive Director Achim Steiner at a gala reception on Sunday evening handed over the award to Sheikh Hasina.

Talking to the Daily Observer, Governor of Bangladesh Bank Dr. Atiur Rahman said, “This award really reflects the fact the endeavour and advocacy so successfully carried out by Sheikh Hasina to mitigate and address the devastating effects of climate changes not only on Bangladesh but on the globe as a whole”

1443461943He said, “Bangladesh is the worst victim of climate change. We expect that the developed countries that have created such detrimental situation in the earth would do everything for its mitigation. Still then our Prime Minister is moving on a higher grade and spending a huge amount of money from our own fund to coup with the situation caused by climate change.”

“Everywhere in the world—in New York, Geneva, Copenhagen and all other venues our Prime Minister is highly vocal and proactive to save the earth from environmental degradation. Among all leaders of the developing nations, Sheikh Hasina’s cry for arresting havoc of climate change is largely noticeable,” he added.

SHEIKH HASINA_receives_Champions_of_the_EarthWater and environment specialist Ainun Nishat said, “Such a prestigious award is a great achievement for all of us. This is an international recognition. No doubt Prime Minister Sheikh Hasina has worked in the areas which are vulnerable to climate change. I expect she will be able to successfully bring those issues relating to climate change and take appropriate measures.”

“Receiving this award will be meaningful if we can uphold the spirit under which consideration the award was given”, he added.

Vice Chancellor of Dhaka University Prof AAMS Arefin Siddique said, “It is not that Sheikh Hasina has been working over climate issue for only Bangladesh, rather she has long been making commendable contributions in arresting the detrimental effects of climate change over the globe.”

He said she was adjudged for this prestigious award as her contributions and role in protecting the earth from the climate change fallout have been highlighted in the world press very vividly.

“Sheikh Hasina is a world leader – she thinks for the world humanity – she works for a peaceful world,” the VC said, adding: “This award is its best testimony”.

Congratulating Prime Minister Sheikh Hasina for her achievement, Executive Director of Transparency International Bangladesh (TIB) Dr Iftekharuzzaman said, “This prestigious award is the pride for us, our government and also the common people. Additional responsibility came to the Prime Minister’s shoulder for this recognition. So, Sheikh Hasina and her government should have to avoid those decisions which will further exert bad impact on the climate as well as undermine this recognition.”

“Bangladesh now an instance to the world on the climate change issue and this opportunity should be taken by the government to carry out duties,” he added.