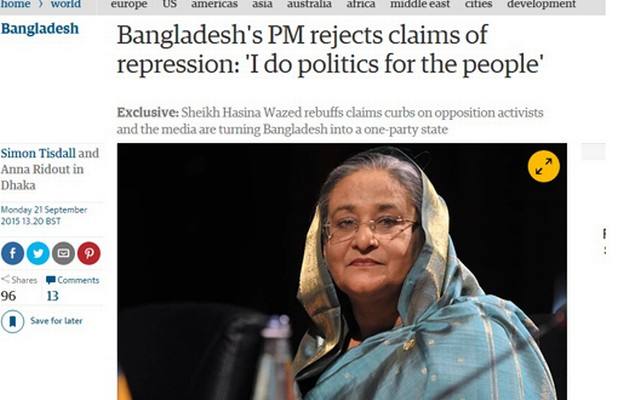 Bangladesh’s PM rejects claims of repression: ‘I do politics for the people’

Exclusive: Sheikh Hasina Wazed rebuffs claims curbs on opposition activists and the media are turning Bangladesh into a one-party state

Bangladesh prime minister, Sheikh Hasina Wazed, says she is striving to meet her people’s basic needs in a country with an economy growing at 6%. Photograph: Luis Acosta/AFP/Getty Images

Bangladesh’s prime minister has dismissed accusations that democracy and rule of law are being undermined by her increasingly authoritarian behaviour and by extensive human rights abuses by the police and security forces.

“My job is to assist the common people,” Hasina said. “I do politics for the people, not for me … People are enjoying democracy now. What people want is their basic needs. So I’m trying to help people ensure their basic need, that means food security, healthcare, education, and job opportunity and a better life.

“By 2021 Bangladesh will be a middle-income country and by 2041 Bangladeshwill be a developed country … All the democratic institutions are working and people are satisfied and people are enjoying it. So the way you say I am dominating, I am not dominating. I am serving people.”

Hasina, in power since 2009, is credited internationally with helping Bangladesh achieve key UN anti-poverty and development goals and appears to enjoy a high level of domestic support.

On the issue of press freedom, Hasina said her ruling Awami League (AL) government had allowed an unprecedented expansion in privately-controlled television channels, newspapers and online media since the 1990s.

“Who brought the change? It is me. I opened it up,” she said. “Now we have 41 private television channels [and] altogether nearly 700 newspaper all over the country. So they’re writing and they’re totally free. And NGOs are also working according to the rules and law they have.

Hasina said the biggest opposition party, the Bangladesh Nationalist party (BNP), from whom she took over power in 2008, had shot itself in the foot by boycotting last year’s national polls, which the the AL and its minor party allies subsequently won by default. The BNP and its controversial Islamist party ally, J amaat- e -Islami (JEI), have since launched sometimes violent demonstrations and nationwide strikes to try to force new elections under the supervision of a caretaker government, so far to no avail.

The BNP is led by Hasina’s long-time nemesis, Begum Khaleda Zia , widow of Ziaur Rahman , the military leader who ousted Hasina’s father, Sheikh Mujibur Rahman , in a coup in 1975. Mujibur was murdered along with many other members of the family. Bad blood has simmered ever since.

In her Guardian interview, Hasina did nothing to end the feud. She said she had telephoned Zia before the 2014 elections, offering her ministries in an interim, joint administration as a way of overcoming BNP suspicions that the poll might be rigged. Zia refused, in furious tones, if Hasina is to be believed.

“[Zia] made a political mistake not to participate in the election,” Hasina said, accusing her opponent of supporting terrorism and launching killing sprees across Bangladesh.

Hasina, who has escaped several assassination attempts since entering politics, is accused of using public fears about terrorism to smear political opponents and justify harsh action against them. Critics say that despite her strong stance, she has failed to curb an ongoing, nationwide Islamist revival linked to similar movements in Pakistan and the Middle East – and is losing the “battle of ideas” with militant Islam.

Arrests of political activists for public order offences are reported almost every day. Last week 13 Jamaat-e-Islami leaders, including two former MPs, were remanded in custody after bomb-making equipment was allegedly found in a flat in Dhaka. The BNP and JEI say such cases are groundless and typically amount to deliberate harassment.

The opposition parties also claim the government is exploiting the country’s international crimes tribunal (ICT) investigating mass killings at the time of Bangladesh’s 1971 war of liberation from Pakistan, and the 1975 assassinations, to settle old scores. JEI backed Pakistan against the independence fighters led by Hasina’s murdered father. Several JEI leaders have been sentenced to death or long prison terms since the ICT process was launched by Hasina in 2009.

“There is a growing authoritarian trend towards one-person rule. The result is that we are on the brink of a loss of democracy,” Rahman said. “Most government institutions, like the police and the judiciary, are losing their autonomy. The civil service bureaucracy has lost is independence.”

“Civil society actors are also under pressure – the universities, the media, people using social media. There is an increasing trend towards self-censorship. You can speak out, but you do so at your peril. The NGOs are also heavily regulated now.”

Speaking on condition of anonymity – “people just disappear in the middle of the night and I don’t want to be one of them” – a former general said Hasina lacked a mandate to govern, due to the 2014 electoral boycott, and thus was forced to rely on co-opting the “core machinery” of the state, meaning the RAB, the police, border guards, the civil service and, crucially, the army.

UN peacekeepers from Bangladesh in Ivory Coast in 2005. Continued lucrative assignments with the UN are said to bolster the Bangladesh military’s support for Hasina. Photograph: Luc Gnago/Reuters

“The military’s top echelon support her, the top guys were all appointed by her,” the general said. “The military has been bought off with salary increases and a big budget. It is now Bangladesh’s biggest business. It owns banks, hotels, real estate, industries, even Dhaka taxis. And its UN peacekeeping role is very lucrative – it is the world’s number one contributor to international peacekeeping operations. And Hasina has bought new weapons systems to please them.”

But while the AL need not fear another army coup, at least for the time being, nobody could predict how the military’s conservative middle and lower ranks might react in future, the general said.

“There is a tipping point coming,” said Iftekhar Zaman , director ofTransparency International Bangladesh. “When it tips, and who knows when but it will, it will be very chaotic. It will not be good for Bangladesh or for the international community, or the UK,” with its large Bengali diaspora.

Mahfuz Anam , editor of Dhaka’s biggest-selling English-language newspaper, the Daily Star, said Bangladesh faced an unprecedented situation where a press that was never entirely free was now being actively persecuted by the authorities. He cited new catch-all internet and broadcasting legislation prohibiting the expression of views deemed disrespectful to the state, plus arrests of journalists and the targeting of anti-government TV stations and live chat shows. In his opinion the media was increasingly operating in an “extremely constrained” environment that often resulted in self-censorship.

“The government has vanquished all its political rivals,” Anam said. “Now its focus is on media criticism, because we are independent. We have been very strong on corruption and democratic values. They just won’t accept any dissenting view.”

Other critics point to the ambivalent official response to the recent spate of murders of atheist bloggers by an extremist Islamist group, Ansarullah Bangla Team. While condemning the attacks, police spokesmen trotted out Hasina’s mantra, reiterated on 3 September, that comments from any quarter that “hurt others’ religious sentiments” cannot be tolerated.

Such pronouncements have been taken to imply the free-thinking bloggers brought the attacks on themselves, a disturbing interpretation whose twisted logic is challenged in a highly critical preliminary report by the UN’s special rapporteur on freedom of religion or belief, Heiner Bielefeldt, who visited Bangladesh earlier this month.

Despite his misgivings, Anam, like other critics, expressed grudging admiration for Hasina who he said had reached the peak of her power after a long personal and political struggle.

With the economy growing annually at about 6%, with living standards rising for most (from an admittedly low base), and with the country relatively stable compared to the upheavals of the past, most Bangladeshis appear content to have Hasina in charge. A recent poll by Nielsen-Bangladesh, echoing previous surveys, gave her an impressive 67% approval rate.

“She has hanged her father’s killers, she has vanquished the opposition, she is popular in the country, the army is under her thumb, development is a success story, and the constitution gives her unlimited power,” Anam said.

“I think you have a phrase for the prime minister in the UK? First among equals. Here it’s different. Hasina is first. No equals.”

Robert Watkins, a senior UN official based in Dhaka does not foresee trouble. “I don’t think there will be an explosion. As long as the economy is improving, as long as people can come to Dhaka and get a job, as long as the government keeps people busy and fed, they will be less concerned about democracy.

“It’s not a top priority for most people. They’re not happy with the [2014] election outcome. But getting on with life is more important.”

Internationally, Hasina seems to have the tacit support of the US and Britain, which recognise the importance of a rising power with an important textile industry. Both governments condemned the conduct of the 2014 election and demanded new polls. Both have since dropped public criticism.

“They just seem to be hoping there will be a better election in 2019,” a western official commented. Hasina’s importance as a partner for the west in fighting Islamist extremism trumped their concerns about the democratic deficit, the official said.

India and China, meanwhile, are both supportive of the government, and both are seeking to increase their business and investment stake in the country. Asked about her future intentions, Hasina, who will turn 68 this month, said she was happy to carry on indefinitely.

Her son, Sajeeb Wazed, also known as Joy (meaning victory), is widely expected to succeed her as AL chief, if and when she retires.

The stark reality in Hasina’s Bangladesh is that no one has the power to insist – and few would dare to disagree. As usual, Hasina has the last word: “In our country we practice democracy like your Westminster type of democracy, so as long as people want, I will be there. If they do not, OK, fine. Whether I’m in power or not, I’ll work for the people, and I’m doing it.”