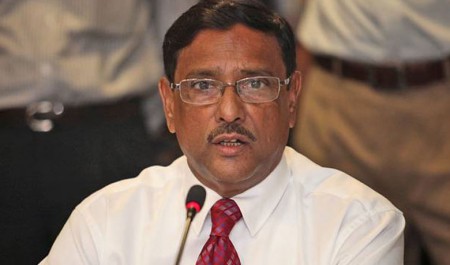 Bangladesh, Bhutan, India and Nepal can be connected via land by six possible routes, Road Transport Minister Obaidul Quader said on Monday.
The transport ministers of the four countries signed an agreement on June 15 to help the movement of people and goods among the countries via the roads which will be used to transport passengers and cargo.
The possible routes as mentioned by Quader were Kolkata to Chittagong via Benapole-Jessore-Dhaka and from Chittagong to Shiligurhi via Dhaka-Hatikumrul-Bogra-Rangpur-Burhimari.
A third route is from Dhaka to Bhutan’s Thimphu via Hatikumrul-Bogra-Rangpur-Burhimari through India’s Chengrhabanda-Joygaon and Bhutan’s Phuentsholing.
There is also a Dhaka-Kathmandu route via Hatikumrul-Bogra-Rangpur-Banglabanda through India’s Phulbarhi-Panitanki and Nepal’s Kakrhavita; Kolkata to Bhutan’s Samdrup Jongkhar via Dhaka-Sarail-Sylhet-Tamabil through India’s Dauki-Shillong-Guwahati; and Khulna to Kolkata via Jessore-Benapole.
There is still the issue of easing visa processing under the BBIN agreement, which will be discussed in October when Bangladesh and India’s home secretaries meet.
After the meeting on Monday, the countries will now take initiatives to sign a protocol on the movement of passenger and cargo vehicles under the agreement by December this year.
A cross-border cargo trial run is also planned in the October-November period to reach an agreement, and in addition to that, a motor rally will be organised with BBIN representatives from November 14 to December 1.
Quader added, “It will start in India’s Bhubaneswar and enter Bangladesh through Akhaurha via the Nepal-Bhutan-Assam-Tripura route. It will cross the border through Benapole before finishing at Kolkata.”