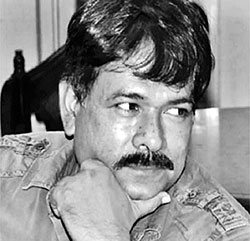 Peace is the polar opposite of war and violence. Where there is war, there is no peace and vice versa. Although the quest for peace has always been the avowed goal of an individual or a group in human society, it is often impeded by acts of violence and crimes. However, the quest for peace never ceases to exist. Martin Luther King, Jr. was over-optimistic about the possibility of peace. So was Mother Teresa, who thought the process of peace to be so easy that it can simply begin with a smile. However, when the bloodthirsty Zionist hyenas are still spilling innocent blood in Gaza or the bloodthirsty forces of ISIS are parading through the vast tracts of Iraqi and Syrian Desert posing threat to the entire Arabian Peninsula, how far it can be hoped that there is light of peace at the end of the long tunnel of violence? The global conscience however is trying to remove the dark vision and show the light. But to little or no avail! However reassuring the buzzwords- ‘freedom’ ‘democracy’, ‘socialism’, ‘human rights’ may sound, the perennial conflict among the super powers and the cold war for global political ascendancy and supremacy have sent peace into exile giving way to constant fear and tension.

The course of history is serpentine. The chain of historical events is non-linear! Who could imagine that after having crossed the darkest days of the Middle Ages and been influenced by the ideals of the Renaissance, the Reformation and the Enlightenment, the events of history would take a U-turn and lead to two world wars within a time lapse of a couple of decades inflicting heavy casualties on innocent population? People were scared out of their wits to see the deaths of more than 37 million people in the First World War, and 60 million in the Second. It shook the foundations of all human beliefs and ideologies. But then again, people did not give in at the end of the day. In fact, there is no holding human progress. The more human hopes are shattered, the more they hope against hope, and this is how, the long journey of the pursuit of peace and happiness is in progress in the face of overwhelming odds.

Though Bangladesh has emerged as a comparatively new state in the globe, there is little scope for underrating its role in regional and global peacekeeping activities. Given its geographical location, it has an added importance in the contemporary geopolitical context. It has immense potential for contributing to Southeast Asian peace process and thereby to the global one. Besides, Bangladesh has a rich political heritage of participating in all world peace activities conducted by the United Nations. The founding father of the country, Bangabandhu Sheikh Mujibur Rahman, himself was a champion of peace and moved heaven and earth for the cause of global peace. His speeches at different international forums, i.e. the UN General Assembly, the Non-Aligned Movement, OIC etc. bear the stamp of his strong pacifist beliefs and commitment to international peace. In the 1973 Arab-Israel War, he took a bold stance against Israeli oppression, and extended unconditional support to the Palestinians. He was always against unprovoked military aggression, and advocated the use of nonviolence in the society for sustainable peace. For his peace- loving activities, he was awarded the prestigious peace accolade, the Joliot Curie Prize in 1973 by the World Peace Council. In the light of Mujib’s nonviolent political strategy, the newly independent Bangladesh adopted the principle of ‘friendship with all and malice towards none’ as the base its foreign policy.

Sheikh Hasina, too, during her first premiership in 1997 drew up the Chittagong Hill Tracts Peace Accord between her Government and the Parbatya Chattagram Sanghati Samiti (United People’s Party of the Chittagong Hill Tracts), the outlawed political organization called the ‘Shanti Bahini’ and put an end to the decades-long insurgency between the Shanti Bahini and government forces. Not only did this historic peace accord help restore national security, it paved the way for regional peace and harmony. If this long-drawn insurgency had not been resolved at that time, it would have, by now, grown as the biggest threat to Bangladesh’s internal security and Southeast Asian security as well. It could also have provoked, in numerous ways, cross-border insurgencies into acts of repeated violence, and prepared real grounds for mudslinging between the countries with regard to aiding and abetting insurgencies, which could have destroyed the peacekeeping processes of the entire region. It can be said that in question of insurgency control, Bangladesh is keeping much ahead, while in terms of cross- border security Bangladesh is more at risk than other neighbouring countries. The incident of the 10-Truck Arms and Ammunition Haul in Chittagong on the night of 1 April 2004, on the Karnaphuli River bears the testimony to the fact. It is the largest arms smuggling incident in the history of Bangladesh that was allegedly intended for the United Liberation Front of Assam (ULFA), a secessionist militant group fighting for the independence of Assam from India, and was held responsible for causing thousands of deaths since 1979. These sorts of incidents are detrimental to peacekeeping processes, and Bangladesh and India can play a mutually supportive role in controlling their respective armed insurgents and in stopping to provoke their counterparts in other countries.

In the regional and global peace process, Bangladesh can play another important role in curbing the obnoxious growth of the Islamist militants, which poses the biggest threat to regional and global peace. Though Bangladesh has long been a secular country socially, politically and culturally, there have been attempts, in the post-1975 era, of deviation from the secular tradition. The defeated counter-revolutionary forces of 1971 and the opportunist military rulers have used religion to grab power, and thereby given rise to militancy, which sometimes took on massive proportions. The heinous grenade attack on 21 August (2004) and the series of bomb- blasts rocking the whole country on 17 August (2005) are shining examples of organized violence by the reactionary elements infiltrated into the society. Maybe, due to Sheikh Hasina’s tough line on militancy, it seems to be mitigated, but it has not been eradicated from the country. On ‘favourable’ condition, they will again nail their colours to the mast. The Al- Qaeda leader Zawahri had reportedly announced on a videotape the formation of an Al Qaeda wing in Indian subcontinent to ‘raise the flag of jihad’ across the subcontinent including Bangladesh and Myanmar. That Bangladesh would, as a Muslim majority country, be a prime target for militant operations is not unthinkable. So there is no alternative but to create a sustainable social, political and cultural resistance circle to keep a tight rein on religious militancy. By doing this, Bangladesh can contribute to the building up of a militancy-free subcontinent and thereby a peaceful world. In addition, her anti-militancy role can provide a model that other Muslim countries can follow.

Though Bangladesh’s having come into the possession of a vast territorial sea, an exclusive economic zone and the sizable continental shelf internationally settled by the UN Permanent Court of Arbitration has paved the way for the equitable compromise with India and Myanmar on maritime boundaries after a long period of territorial dispute, there is still cause for greater alarm, which may hamper peace in the Bay. Therefore, only by a pragmatic strategic approach to the maritime deal and by a smart international diplomacy, Bangladesh can alleviate all maritime tensions and ensure peace in the Bay.

Bangladesh is a land of endless possibilities. Given the size and economic condition, it may be found at the bottom of the list, but that is not the eternal truth. The prime concern of today’s world is not the size of a country but its population. The main reason for the development of India and China is their population. If we can turn 160 million people in Bangladesh into human resources, we won’t have to look back. In a world of 7000 million people, we cannot even dream of international peace ignoring one-sixtieth Bangladeshi. Nor is it possible to make peace among 600 million South Asian people avoiding 160 million of Bangladesh. Therefore, in terms of both regional and global peace, Bangladesh is a country of immense importance. If Bangladesh stays safe, the possibilities of Southeast Asia’s remaining safe would be easier; again, if Southeast Asia remains safe, the rest of the world cannot be far away from the attainment of peace. The reverse is also true! If the world stays safe, Bangladesh will not be drifted apart. Long live Bangladesh! Long live peace!