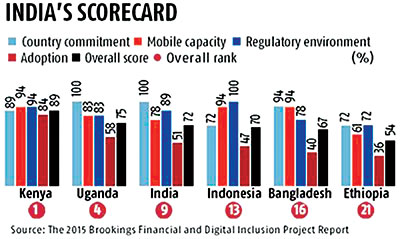 Bangladesh has been ranked 2nd among 21 countries in terms of smart phone capacity scored, according to the 2015 Brookings Financial and Digital Inclusion Project (FDIP) report published Wednesday, while Pakistan ranked 11 and India 16.
South Africa achieved the highest ranking for mobile capacity, with the percentage of unique subscribers comprising about 70 per cent of the population and about 96 percent 3G mobile network coverage by population.
Kenya, which tied with Indonesia, Bangladesh, Colombia, Rwanda, and Afghanistan for the second highest ranking on the mobile capacity dimension, provides a salient example of how mobile financial service offerings can diversify beyond basic transactions.
The FDIP report assessed the extent of 3G mobile network coverage and the degree of unique mobile subscribership as part of its assessments in selected 21 countries.
The countries are: Afghanistan, Bangladesh, Brazil, Chile, Colombia, Ethiopia, India, Indonesia, Kenya, Malawi, Mexico, Nigeria, Pakistan, Peru, the Philippines, Rwanda, South Africa, Tanzania, Turkey, Uganda, and Zambia.
The Brookings Institution is a nonprofit organization devoted to independent research and policy solutions. The FDIP report evaluates and ranks countries based on four dimensions of financial inclusion – the country’s commitment to increasing financial inclusion, its mobile capacity, the regulatory environment, and adoption of traditional and digital financial services.
However, in overall FDIP ranking, Bangladesh has been ranked 16 out of 21 countries, while India ranked 9 and Pakistan 18. Kenya has ranked one, followed by South Africa and Brazil and Ethiopia came last on the list.
The top-scoring countries in the FDIP analysis included Kenya (89 per cent), South Africa (80 per cent), Brazil (78 per cent), Rwanda and Uganda (tied with 75 per cent each), and Chile, Colombia, and Turkey (tied with 74 per cent each).
“These countries demonstrated considerable commitment to financial inclusion by defining specific inclusion objectives and taking policy, regulatory, and technological steps to speed progress toward inclusion”, the report noted.
The regulatory environment comprises the third dimension of evaluation of the FDIP report and Bangladesh scored 17.
The last dimension of evaluation focuses on adoption of traditional and digital financial services. Bangladesh scored 15, India 9 and Pakistan 19.
The developing countries in Asia generally ranked lower on the scorecard. Most of these countries received low scores for formal account penetration among low-income individuals, as well as for debit card use, credit card use, use for bill payment and purchases, and mobile money adoption.
According to the report, Bangladesh has demonstrated its commitment to providing access to quality financial services for the under-resourced through a responsive regulatory environment and emphasis on digital financial services, further work remains.
“There is a significant gender gap in mobile phone ownership: In 2014, about 76 per cent of men owned mobile phones, compared with only 46 per cent of women”, it said.
Mobile financial services (MFS) have been an increasingly prominent aspect of the digital financial services landscape and provide opportunities for financial inclusion growth. In 2013, registered MFS accounts in Bangladesh experienced the fastest rate of increase of any country, it noted.
Bangladesh is home to bKash Ltd., which in 2014 boasted more than 80,000 agents and was the second largest mobile money company in the world in terms of the number of individual accounts. In the future, the scaling up of other deployments could produce a more competitive MFS market, it added.
Quoting the World Bank data, the report noted, there were about 76 mobile cellular subscriptions for every 100 people in Bangladesh in 2014. The rate of access was higher when considering the number of individuals who could borrow phones. While 61 per cent of respondents owned a mobile phone, according to the 2014 InterMedia survey, 97 percent owned or could borrow a mobile phone.
One of the challenges to increasing mobile money adoption in Bangladesh is that trust in mobile money is lower than trust in banks. Another obstacle to mobile money take up is that transaction fees are considered prohibitively high by many adults in Bangladesh.
Bangladesh Bank, the Microcredit Regulatory Authority of Bangladesh, and the Ministry of Finance of Bangladesh made a commitment to the Maya Declaration, and a designated team within Bangladesh Bank is in place to monitor the country’s progress toward its Maya Declaration targets, the report said.
“Financial inclusion is a target component of the central bank’s strategic plan. Extensive MFI networks could be leveraged to increase financial inclusion if more MFI accounts were digitized. Opening up the regulatory environment to non-bank actors could also generate more competition among providers and stimulate more diverse offerings”, the report said.
About 62 per cent of adults age 15 and older around the world have access to an account at a formal financial institution or mobile money provider. That leaves about 2 billion adults globally who are not account holders, the report said quoting some research findings, it added. 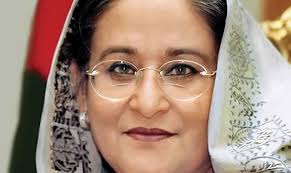