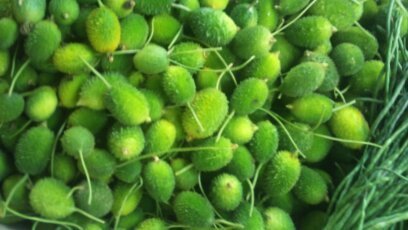 Cultivation of teasel gourd (Kakrol) has made the farmers ecstatic at different upazilas of Rangpur district as they are making handsome profit through its cultivation on their lands during the current season.

Inspired by good profit in comparison with many other crops a number of farmers of the region are cultivating this popular variety of vegetable on their lands instead of other crops in recent years.

Solaiman Ali a farmer of Jaigirhat area under Mithapukur Upazila in the district, told The Financial Express he has brought one bigha of land under cultivation of teasel gourd this season and earned Tk 20,000 so far.

He is expecting more dividends during the remaining part of the season. Many farmers of the upazila and other parts of the district have become able to overcome the curse of poverty by growing different varieties of vegetables including teasel gourd, he added.

Helal Mia, a farmer of Baniapara village under Taraganj upazila said, “I have cultivated Kakrol on my farmlands this season instead of other crops. I have also got excellent output of the produce so far”, he added.

Many farmers of the district are also cultivating it by using eco-friendly pheromone trap instead of harmful pesticide.

“We do not use any insecticide to produce Kakrol and some other vegetables. Instead we use pheromone trap. Such vegetables are healthy, tasty and more nutritious,” a number of farmers of Changmari village under Gangachara upazila, told The Financial Express.

If the cultivators get interest-free loans, necessary help from DAE and other agricultural inputs, they will certainly be benefited by farming vegetables on large scale, they added.