Bangladesh’s booming economy, growing at a six per cent annual rate, is driven by its well-known apparel industry. Perhaps more critical to the country’s future, however, is its emergent information technology sector, which stands to transform Bangladesh from a labour-intensive economy into a knowledge-based one.
In late June, Bangladesh announced it would partner with Indian IT giant Infosys to build Bangladesh’s largest technology park, a complex that will employ as many as 60,000 information technology professionals.
Sited about 25 miles north of Bangladesh’s capital, Dhaka, the new technology park attract Bangladeshi and foreign entrepreneurs seeking to tap the country’s youthful, digitally savvy workforce. Bangladesh’s ambition: to become a world leader in graphic design and web and mobile app development.
The sprawling tech park is only the latest example of Bangladesh trying to provide an expansive employment base for its citizens, lure foreign capital and make Bangladesh an IT powerhouse.
This push is coming from above, by forward-looking government policies, and from below, by a startup culture centred in Dhaka, where incubators, co-working spaces, and entrepreneurial conferences are expanding.
Startup Weekend, a yearly global event at which entrepreneurs are challenged to launch startups in 54 hours, has taken hold in Bangladesh. At Startup Weekend 2013, a Bangladeshi graduate of the London School of Economics founded Dugdugi, Bangladesh’s only legal streaming music service.
Noting a general lack of knowledge and appreciation for data-driven decision-making in their home country, four young Dhaka businessmen walked away from careers in banking, technology and other fields in 2013 to found LightCastle Partners, which offers business analytics solutions to Bangladesh businesses.
Bangladesh’s burgeoning startup scene is getting noticed. Silicon Valley venture capital firm 500 Startups invested in Chaldal.com, an online grocery store founded by a Bangladeshi who graduated from the University of Pennsylvania’s Wharton School. Chaldal.com delivers daily necessities to time-pressed consumers in Dhaka.
A country of 165 million people, Bangladesh has 100 million mobile subscribers with 50,000 new subscribers joining every day. The more than 29 million mobile internet users are changing the way citizens are going about their daily lives, with e-commerce experiencing 50 per cent growth in each recent year.
Digitisation of government services and expansion of Bangladesh’s IT economy was a core principle of Prime Minister Sheikh Hasina’s election in 2009 and re-election last year. As part of her 2014 election campaign, the prime minister launched “Digital Bangladesh Vision 2021,” a plan to fully digitise Bangladesh by 2021.
The recently launched BanglaGovNet project is a dedicated, secure network connecting dozens of government ministries and hundreds of government directorates with regions around the country via a high-speed fibre optic system. The network will deliver government services to citizens’ doorsteps, increasing transparency and efficiency and reducing corruption.
The rural poor in Bangladesh have been forced to travel long distances to receive the simplest of government services and information, losing wages in the process. To remedy this, the government created the Access to Information online programme, which brings government services to its citizens. They can access government sites, see public exam results, read online textbooks and take advantage of a range of services from home.
The government will also partner with the Better than Cash Alliance, a United Nations-based programme supported by several governments, including the United States, and major financial companies, such as Visa. The Better than Cash Alliance accelerates the transition from cash to digital payments. It will enable the government of Bangladesh to digitise all forms of social welfare payments to its citizens and allow them to pay digitally for government services.
Bangladesh’s digital breakout is already improving the lives of its people. In late June, the World Bank said that Bangladesh—long classified as a ‘low-income’ country—has improved to become a lower middle-income country, a testament to the government’s efforts to create jobs and lure investment.
Indeed, foreign investment in Bangladesh’s capital markets doubled last year, compared to 2013, with American investors leading the way with more than 60 per cent of the surge, according to a Bangladesh Bank report.
All of this is why P K Agarwal, former chief technology officer for the state of California and CEO of TiE Global, a non-profit dedicated to fostering entrepreneurship, said Bangladesh is the ‘next economic giant’ and has a government that ‘gets IT’.

Sajeeb Wazed is the chief information technology adviser to the government of Bangladesh and the son of Prime Minister Sheikh Hasina. The article first appeared in The Diplomat, July 30, 2015 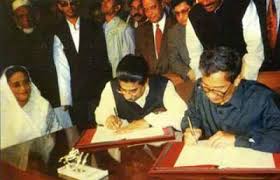