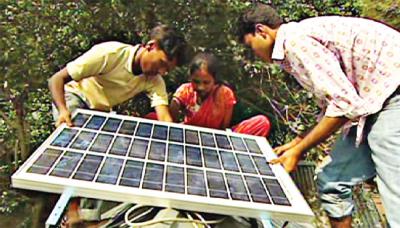 In view of its significant successes in power sector by introducing short- term rental and quick rental power plants in the last six years, the government is now looking for funds for long- term project to materialize the Master Plan for generation of 2,4000MW of electricity by 2021.
According to the Master Plan, the mega- projects are : 1,320MW Rampal plant, 1,200MW Matarbari, 275MW Barapukuria, 565MW Khulna, 522MW Munshiganj, 635MW Dhaka and 282MW, 282MW and612MW Chittagong and 1,320MW Maheshkhali power plants.
To attain the target of achieving long- term funds, the Power Division has decided to collect the financial support from the stock market apart from collecting funds from donor agencies and the foreign development partners. It has, in the meantime, also formed a high level committee and planed to recruit a finance advisor to materialize the scheme.
Secretary for Power Monowar Islam told the Daily Observer on Friday, “We are working to ensure the funds for our big projects. Already we have communicated with the solvent countries and donor agencies.
As per the Master Plan, power sector needs USD8.5 billion to materialize the projects for generation of 2,4000MW of electricity by 2021.
Prof Shamsul Alam, a power sector specialist, told this correspondent on Friday, “When the government took the projects in hand they did not think about funds and as such implementations of almost all the projects are in a state of uncertainty”. He further said that the financial issues should have been clearly laid down in the Master Plan when it was framed.
Rampal 1320MW power project has been rejected from several donor agencies. At the latest spree, 3 French banks said “no” to this eco-sensitive Rampal coal based power plant.
Matarbari, Cox’s Bazar 1,200MW coal based plant needs Tk 40,323 crore while JICA ensured Tk28, 986crore, GoB Tk 7338 crore and Power Grid Company Tk 4,000 crore. Besides, more projects will be set up on the same campus but necessary funds are yet to be confirmed, and Maheshkhali and Bibiana projects are also facing same crisis.
State Minister for Power Energy and Mineral Resources Nasrul Hamid said, to ease the collection of funds, “We are going to appoint an advisor and we will float tender for appointing an advisor. I hope funds would be managed.
Though the government has sanctioned highest amount of money in the last budget for the energy sector, it still suffers from financial crisis, said an official of Power Division who preferred to remain unquoted.
At a recent meeting chaired by Hamid, a committee was formed to collect funds from stock market. Additional Secretary Ahmed Kaikawas has been selected as head of the committee and other members are Finance Secretary ARM Nazmus Sakib, Managing Director, ICCB and managing directors of all power companies.
The committee will advise on how the government would involve the power companies with stock market. Now only two companies – Dhaka Power Supply Company, Power Grid Company are in stock market. – See more at: