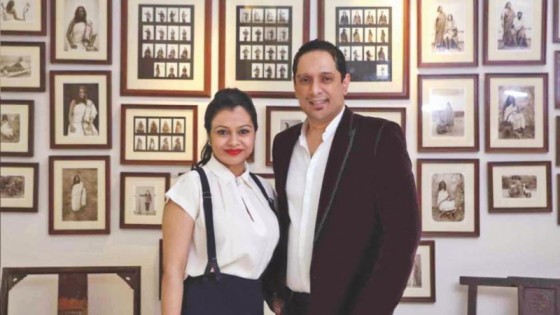 Rajeeb and Nadia Samdani, renowned art collectors from Bangladesh, have been named in the prestigious ArtNews Top 200 Collectors of the world. The 25th anniversary of the list terms the Samdanis “Young Bangladeshi investors, [who] are not only prodigious collectors of art of their region —their vast collection includes modern and contemporary Bangladeshi artists as well as artists from India and Pakistan — they are also avid supporters of it. Rajeeb is co-chair and a founding member of Tate’s South Asian Acquisition Committee, but the Samdanis have become best known for their biennial, Dhaka Art Summit, which brings together curators, artists, and other arts professionals from around the globe.” Nadia and Rajeeb are the only representatives of the South Asia on the list, with the only other Asian collectors being from places like Taipei (Taiwan) and Kuala Lumpur (Malaysia). The achievement puts the Samdanis next to collectors Pinault, Prada, Arnault, Saatchi to Hollywood star Leonardo Di Caprio.

The Dhaka Art Summit, which was launched in 2012 and in its second edition in 2014 attracted 70,000 visitors — putting it on par in terms of attendance with major international art fairs. February 2016 will bring the third edition of the summit to Dhaka. Their Samdani Art Foundation, in partnership with the Delfina Foundation, gives out the biannual Samdani Art Award to a young Bangladeshi artist — the jury for which includes Cosmin Costinas (director of Hong Kong’s Para/Site), Catherine David (deputy director of Paris’s Centre Pompidou) and Massimiliano Gioni (artistic director of New York’s New Museum). At the Venice Biennale in 2015, the Samdanis’ foundation supported the work of Naeem Mohaiemen and Raqs Media Collective; both included in the curated exhibition “All The World’s Futures”. In 2014 they were nominated for the Forbes India Art Award in the Young Collector of the Year category in recognition of their collection of Indian artists such as Anish Kapoor, Bharti Kher, Jitish Kallat, Ravinder Reddy, Chitra Ganesh, and Subodh Gupta.