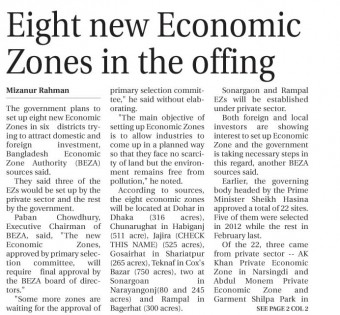 They said three of the EZs would be set up by the private sector and the rest by the government.

Paban Chowdhury, Executive Chairman of BEZA, said, “The new Economic Zones, approved by primary selection committee, will require final approval by the BEZA board of directors.”

“Some more zones are waiting for the approval of primary selection committee,” he said without elaborating.

“The main objective of setting up Economic Zones is to allow industries to come up in a planned way so that they face no scarcity of land but the environment remains free from pollution,” he noted.

Sonargaon and Rampal EZs will be established under private sector.
Both foreign and local investors are showing interest to set up Economic Zone and the government is taking necessary steps in this regard, another BEZA sources said.

Earlier, the governing body headed by the Prime Minister Sheikh Hasina approved a total of 22 sites. Five of them were selected in 2012 while the rest in February last.

Finance Minister AMA Muhith in his budget speech on June 4 said that the government has plan to establish 100 Economic Zones across the country in next 15 years to raise export earnings by $40 billion and create employment for some 10 million people.

The BEZA has so far approved the proposals for 22 economic zones, with construction set to begin at Mongla, Anwara, Mirsorai in Chittagong, Moulvibazar and Cox’s Bazar.

Investors in these industrial sites will be able to manufacture goods to cater to both the domestic and foreign markets.

National Board of Revenue (NBR) says investors in the Economic Zones will get a full tax waiver on incomes in the first three years, after which the benefits will progressively decline.

For instance, investors will get 80 per cent tax waiver in the fourth year of commercial production, with the tax breaks declining by 10 per cent each year to touch at 20 per cent in the 10th year, said the official. The tax benefit will be phased out in the 11th year.

Apart from the benefits, the companies will also get tax exemptions on declared dividends from the beginning of commercial operation.

Foreign technicians appointed to the factories inside economic zones will get a 50 per cent tax waiver on their incomes in the first three years of their arrival in Bangladesh.