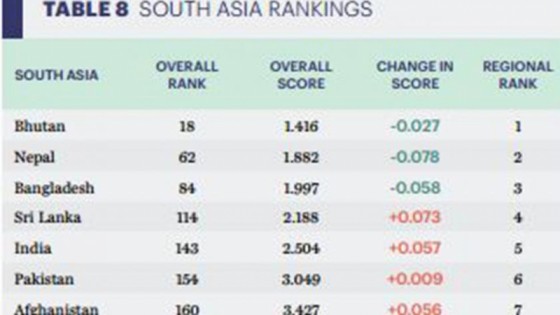 Bangladesh is the third most peaceful country in South Asia and has ranked better than neighbouring India and Pakistan, a report says.

However, the country has been ranked 84th in the world in the list in the Global Peace Index published by Institute of Economics & Peace.

Bangladesh registered a gain in peaceful atmosphere inside the country, what has been termed by the report as a category of “medium state of peace”.

According to the report, the thinly populated Iceland in the midst of the North Atlantic has retained its place as the most peaceful country in the world.

In South Asia, Bhutan is the most peaceful country followed respectively by Nepal, Bangladesh, Sri Lanka, Pakistan and the war-torn Afghanistan.

The report ranked 162 nations around the globe based on factors like the level of violence, crime, involvement in conflicts and the degree of militarization.

Six out of the top 10 most peaceful countries were European, with Denmark and Austria holding the second and third spots.