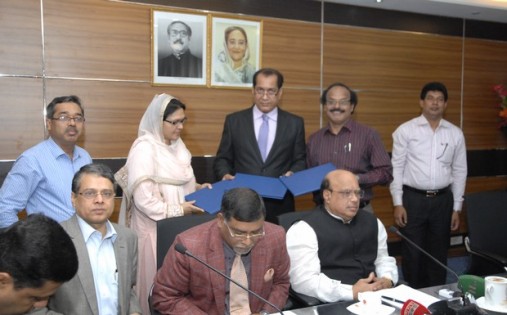 The local government ministry signed an agreement on Monday with the health ministry to implement this new project in 42 Upazillas of seven districts, mostly northern.
Under the five-year project, during each of two pregnancies, women would get Tk 200 for each of four check-ups.
A family will receive Tk 500 a month for checking growth of their babies up to two years of age, and then Tk 1000 every three months until five years of age.

Mothers will also get Tk 500 for attending workshops on child nutrition and knowledge development.
Officials say the project has been built on the “successes” of a pilot scheme for cutting maternal deaths further and addressing malnutrition.
Bangladesh is on the track of achieving MDG 5; yet at least 194 women per 100,000 die during childbirth.
With more than one-third of the under-5 children being underweight, Bangladesh is among the top 10 countries with the highest prevalence of malnutrition.
Studies show most of the would-be mothers die while giving births as only about 30 percent women deliver at the hand of skilled providers.
Ensuring medical check-up known as ante-natal care during the pregnancy is the key to identifying the mothers at risk and prepare them for a successful childbirth.
Health and Family Welfare Minister Mohammed Nasim, who witnessed the signing between the director generals of local government, and health and family planning, said the project would encourage mothers to come to facilities for check-ups.
“We’ll have strict monitoring,” he said, “They will get postal cash card to withdraw incentives from the post offices.”

But maintaining quality of those tests would remain a challenge since government facilities at villages lack a vital urine test during pregnancies.
The urine test is needed to catch the sign of developing eclampsia, a major cause of women’s death.
The minister, however, could not answer the question as to how they would ensure this.
Director General for Health Services Dr Deen Mohammad Noorul Haq said they would refer any complications to Upazila hospitals. It means the village facilities like community clinics would not work on the issue.
According to the project paper, all unions of Gaibandha, Kurigram, Lalmonirhat, Nilphamari, Jamalpur, Mymensingh and Sherpur districts have been picked up due to their high poverty rate and malnutrition.
The World Bank will finance most of the Tk 23.77 billion project. The government will inject only Tk 0.37 billion.

At least 600,000 mothers will be covered by the programme and they will be tracked through Bangladesh Poverty Database.
“This project will help to strengthen postal department, and union councils,” said Local Government Division’s Secretary Abdul Maleq who was present during the signing.
State Minister for Health and Family Welfare Zahid Maleque and Health Secretary Syed Manjurul Islam, among others, were also present.