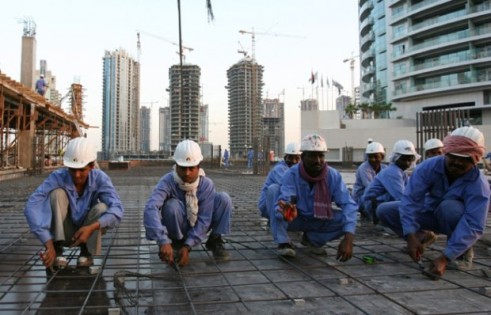 Though manpower export from Bangladesh was declined earlier in the previous years, the demand of Bangladeshi workers has been increasing in the international labour markets day by day after the announcement of reopening the Bangladeshi labour market in Saudi Arabia (KSA).
The manpower recruiting authorities of Qatar, Japan and Korea have shown their interests to boost up manpower import from Bangladesh to fulfil their demands.
At the same time, the restriction on recruiting Bangladeshi workers in the United Arab Emirates (UAE), Kuwait and Malaysia is likely to revoke soon as the government has been working to withdraw the restriction.
In this situation, the Ministry of Expatriate Welfare and Overseas Employment (MoEWOP) expects that the manpower export from Bangladesh is likely to increase this year. As a result, earning of the foreign remittances would also be augmented in the upcoming years.
Expatriate Welfare and Overseas Employment Secretary Khandoker Md. Iftekhar Haider told the Daily Observer on Wednesday that Bangladesh is already sending the skill and unskilled manpower in 157 countries. Most of the countries are receiving limited workers according to their demand and requirements.
The demand is now increasing day by day as the government has taken crash programmes to accelerate the manpower export from the country. We have already got some demand from different countries. Some of the countries that were importing limited workers are also intending to import more workers in future, he said.
The Secretary also said that Japan and Korea have already intended to increase manpower recruitment from Bangladesh. They are going to sign agreements with the government soon. The market of Malaysia has already been opened. But, it’s taking limited workers under government to government management basis.
“The government is also working to expand the Bangladeshi labour markets in Europe and American countries along with the traditional markets. We are also getting positive response from those countries. The remittance earning of the country would increase in future, if the government achieves success in its programmes,” he added.
Iftekhar Haider said that Qatar has already expressed its interest to recruit  1.5 lakh workers in this year. The KSA will also import 1.2 lakh workers from Bangladesh every year from now onward.
According to the Bureau of Manpower Employment and Training (BMET), the major countries that are accepting Bangladeshi workers, are- Saudi Arabia (KSA), Kuwait, United Arab Emirates (UAE), Qatar, Iraq, Libya, Bahrain, Oman, Malaysia, Korea, Singapore, Brunei, Laos, Mauritius, Spain, Lebanon, and United Sates of America (USA).
There are around 1.5 crore unemployed labour force in Bangladesh at present. The huge number of unskilled, skilled, semi-skilled and professional manpower is also available for foreign employment.
The jobseekers are ready to work in technical and engineering sector, medical sector, industrial sector, computer sector, power station, petroleum and fertilizer sector, road transport and port and water transport sector, financial institutions, insurance, audit & accounts sector, agricultural, animal husbandry, fisheries, livestock and horticulture sector, farmers, teachers of school, college and university sector, hotel management & catering staff and marine crew.
According to the BMET data, Bangladesh has earned remittances of around US$1,35,913.13m equivalent to Tk9,08,374.92 crore exporting around 92,06,196 workers from 1976 to February, 2015.
Of the remittances, a total of Tk1,15,969.62 crore was earned in 2014 while around 425,684 workers exported in different countries. Tk9,673.81 crore was earned only in last two months of 2015. In these two months, a total of 63,390 Bangladeshi workers were sent to different countries.