In the face of rising fatalities caused by spread of swine flu in the neighbouring India, the Bangladesh government has decided to vaccinate some 3,000 frontline health workers across the country.

What puts Bangladesh at risk is the influenza’s spread in West Bengal that borders the western districts of the country. As of March 12, death toll in West Bengal stood at 18 and the number of infected at 274.

Four Bangladeshis who travelled to India in February and March were infected with the virus, but all of them were treated and are out of danger now, Dr Mahmudur Rahman, director at the Institute of Epidemiology, Disease Control and Research (IEDCR), told The Daily Star yesterday.

Dr AKM Shamsuzzaman, director (communicable diseases) at the Directorate General of Health Services (DGHS) said, “Considering the spread of virus in India, we have started administering one shot of influenza vaccine to our frontline health workers because they are at higher risks.”

The physicians, nurses or health assistants posted at the 27 international ports [air, land and sea], isolation wards of district hospitals and IEDCR labs will be vaccinated, he said.

Screening of travellers from India has also begun at the ports since the last week of February with the virus spreading in West Bengal since mid-February.

“We have already vaccinated many of the health personnel at the IEDCR and the airport in Dhaka,” Dr Shamsuzzaman told The Daily Star. He added that all frontline health workers who are at risks will be vaccinated in phases.

The DGHS has already purchased swine flu vaccine for 1,200 health workers and is preparing for purchasing more soon, he said.

Health officials say the authorities are keeping close watch on H1N1 virus, which caused deaths of 8 people in the country during a pandemic in 2009-2010.

They said the risks should have been lower as drugs and vaccines have been developed to fight H1N1 virus, but the fact that the virus has already infected a large number of people in India this year is something worrisome.

Researchers from the Massachusetts Institute of Technology (MIT), USA, in an article on Wednesday said the genetic information of two Indian strains, deposited in public databases in the past two years, revealed new mutations that could make the virus more deadly.

But India’s National Institute of Virology said in a statement on Thursday that the findings were incorrect, according to Times of India.

Professor Dr Be-Nazir Ahmed at the National Institute of Preventive and Social Medicine (NIPSOM) said it is yet to be proved that H1N1 virus has changed its formation, but its possibility cannot be rejected.

“Whatever the case, what we need to do now is to strengthen health screening of the passengers from India at the international ports and be ready with necessary drugs and vaccines,” he said.

Dr Shamsuzzaman said the government is putting high priority on preventive measures and already has a stock of drugs and is going to buy more vaccines to enhance its capacity to fight the virus. 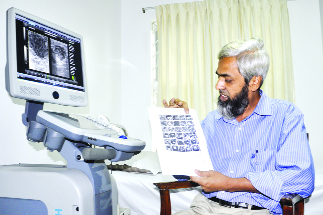