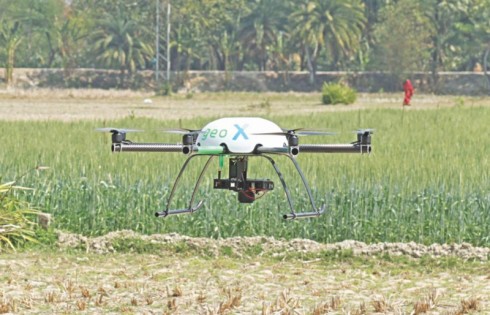 A drone built for collecting farm data is in operation at Jainkathi of Patuakhali Sadar upazila. Photo: Star

For the first time in the country, agriculturalists have started using drones to monitor farmlands in the southern districts of Barisal and Patuakhali.

“Using the images taken by the octocopters, scientists can rapidly assess the condition of crops on a large scale without going through the tedious and time-consuming manual sampling,” he said.

Two drones have been bought from Germany under the 20-month project that began in November last year and are now being used to collect data from 23 acres of land in four villages of Patuakhali and Barisal. Maize, wheat and mung bean are being cultivated in the land.

The project’s prime objective is to analyse farming conditions and improving them in the southern part of the country as per a master plan of the government.

The data obtained through the drone images would help farmers decide when and how to best irrigate and apply fertilisers, Dr Ziauddin told this correspondent while visiting a site in Patuakhali on Monday.

Gradually, data on crop damage from floods and cyclones will also be collected by the drones, he added.

The farmers in the project areas are upbeat about the new technology.

“If we can better understand the needs of our farmlands by using this technology, we can increase production of crops significantly,” said Monirul Haque, a farmer of Patuakhali’s Jainkathi village, a project site.