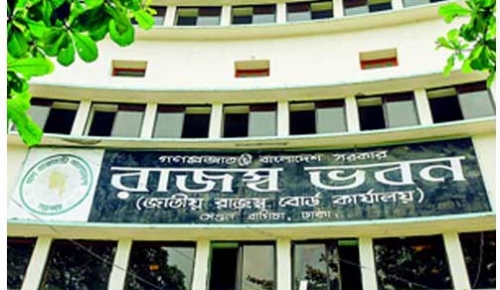 NBR to award 30 organisations and individuals this year

The revenue collection fell 3.4% short of the target (Tk71,825 crore) set for the July-January period of the current fiscal year, but posted over 16% growth compared to same period of last year despite the political unrest.

According to NBR data released yesterday, the National Board of Revenue (NBR) bagged Tk69,466 crore in the first seven months of fiscal 2014-15 compared to Tk59,545 crore it earned in the corresponding period of 2013-14.

However, the NBR board decided to waive tax from the income of philanthropic organisations and also advanced tax on registration or fitness renewal of cars owned war-wounded freedom fighters, who are listed in the gazette.

“The board in its meeting made the decisions following the appeal from the roads and high department,” said NBR Chairman Md. Nojibur Rahman while briefing the reporters at his office after the meeting.

The NBR also decided to formulate guidelines on tax waiver for the humanitarian organisations.

Replying to a question, NBR chairman said: “We will be able to reach the next target as political unrest won’t be able to cast any shadow on our revenue earnings.”

“We’ve also discussed various ways on how to strengthen the administration of the national exchequer and to identify the skilled and best officials for offering them better positions,” he added.

He also noted that the meeting decided to formulate a guideline on tax waiver for the humanitarian organisations, which would be sent to Finance Minister AMA Muhith for his approval.

“We are taking tougher legal action against the tax defaulters as there is still outstanding tax worth Tk26,000 crore to the several customers,’’ he added.

Meanwhile, the NBR has decided to award 30 organisations and individuals for their contribution to the national exchequer in 2014.

NBR Chairman Md Nojibur Rahman made the announcement at the press conference. The decision was taken at the board meeting of the authorities earlier on the day.