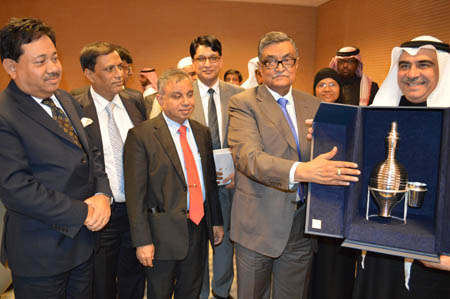 ts UNB.
He also expressed the desire for close cooperation in the area of human resources during a meeting with Expatriates Welfare and Overseas Employment Minister Engineer Khandker Mosharraf Hossain in Riyadh on Tuesday, according to a message received here.
The bilateral meeting between the two ministers was held in the backdrop of a longstanding impasse on labour export from Bangladesh.
During the meeting, the Saudi Labour Minister termed the existing relations between the two countries a time-tested and deep-rooted one with common history, faith, culture and traditions.
Both the ministers discussed at length manpower-related issues and agreed to enhance human resource development cooperation between the two brotherly countries.
Adel bin Muhammad Fakeih underscored the need for a transparent mechanism of recruitment process with online verification by all parties involved in the process. In this regard, he proposed involvement of Skill Verification Services (SVS) in the recruitment process, particularly to secure the interest of both the employees and employers.
He proposed introducing a life-cycle monitoring system for domestic workers from the day they take up a job in Saudi Arabia, which is to be maintained until the end of their employment.
The Saudi minister also suggested developing an online portal, a repository of information related to workers from Bangladesh, for future use by the Ministry of Labour, the court and other authorities.
Khandker Mosharraf Hossain welcomed the proposals and expressed keen interest to work together for the implementation of these ideas.
He apprised the Saudi minister about the entire overseas recruitment process in Bangladesh where the government has introduced three-tier screening process, issuance of MRP and reduction of migration cost.
The two ministers also agreed on forming a Joint Consultative Committee with the objective of improving the recruitment process and resolving any outstanding issue whatsoever to maximise the interest of both the countries.
Deputy Minister of Labour Dr Ahmed Alfahaid and HRH Prince Saud Bin Talal were among the senior Saudi officials present in the meeting. From Bangladesh side, Senior Secretary to the Prime Ministers Office Md Abul Kalam Azad, Bangladesh Ambassador to the KSA Md Shahidul Islam and Expatriates Welfare and Overseas Employment Secretary Khandaker Md Iftekhar Haider were, among others, present at the meeting.