Construction of the 5.2-kilometre Muradpur-Lalkhan Bazar flyover in the city is likely to begin next month.
Cabinet purchase committee at a meeting on Wednesday gave approval for appointing a contractor for the project.
Chinese construction firm Max-Rankin (JV) won the bid for appointment as the contractor for constructing the flyover at Tk 4546.7 million.
After having the purchase committee approval, CDA, implementing authority of the project, now can give Max-Rankin JV the work order.
“We’ll give the work order to start construction of the flyover by October and complete it within two years,” said CDA Chairman Abdus Salam.
“However, the project design may be revised further to construct two roads coming down on OR Nizam Road and Zakir Hossain Road from the flyover at GEC intersection,” said the CDA chairman as construction of the flyover triggered criticism and debate.
CDA took up projects to construct separate overpasses at Muradpur, Sholoshahar Gate No 2 and GEC intersections as recommended in the master plan. The projects for constructing the three overpasses with a total length of 1.65 KM at a cost of Tk 1.53 billion were also approved.
But, a revised project was taken up to construct the 5.2-Km flyover merging the three overpasses in consideration of public demand, claimed Abdus Salam.
Sources in CDA said Executive Committee of the National Economic Council (ECNEC) in a meeting on October 1, 2013 approved the revised project for constructing the four-lane Muradpur-Lalkhan flyover at an estimated cost of Tk 4622.159 million by June 2016.
Following the ECNEC approval, CDA floated international tender in December 2013 to appoint contractor for construction of the flyover.
A total of 13 firms from both and abroad purchased tender schedules while ten of them participated in the Pre-Qualification (PQ) bidding.
CDA sort listed five of the bidders as pre-qualified ones. Four of them dropped technical and financial offers.
Of them, Max-Rankin won the tender quoting Tk 4546.7 million, which was Tk 90 million less than the estimated cost of the project, said the sources.
CDA chairman Abdus Salam said as per the revised project the flyover would have one end at Muradpur and other at Lalkhan Bazar opposite to Jamiyatul Falah Mosque. It would have a 1.7 Kilometer long two-lane loop that would land on Bayezid Bostami Road.
Meanwhile, experts and conscious citizens raised questions about the flyover what they find as not in consistent with the guidelines of Chittagong Metropolitan Master Plan (CMMP) 1995.
Engineer Subash Chandra Barua, who was involved as the local counterpart in preparation of the transportation component of CMMP 1995, said as per recommendation No. 3 of Detailed Area Plan (DAP) construction of a flyover covering GEC intersection and Sholoshahar Gate No 2 intersection could be considered on the basis of survey on traffic volume.
An intersection needs a flyover when more than 8500 vehicles pass through it in an hour. So, no flyover is needed to be constructed even over GEC intersection through which 4904 vehicles pass in an hour as per CDA study.
The flyover would be of a very little use like Bahodderhat Flyover and won’t help ease traffic congestion, he said.
Chittagong University of Engineering and Technology Vice-Chancellor Professor Dr Md Jahangir Alam observed that the flyover must allow entry and exit from the other two sides at each of Muradpur, Sholoshahar Gate No 2 and GEC intersections.
In this regard CDA chairman Salam said they would further revise the project design to construct two roads coming down from the flyover at GEC intersection –one for allowing vehicles from Sholoshahar to land on OR Nizam Road and the other for those from Lalkhan Bazar to land on Zakir Hossain Road.
Construction of these two roads and repair of roads that would be damaged during flyover construction may increase the project cost by around Tk 530 million, he said.
However, when asked Bangladesh Institute of Planners, Chittagong chapter President Engineer M Ali Ashraf observed that carrying out study is also needed to see how much benefit would come from development of such landing facilities at GEC intersection following further revising of the project design CDA thinking of. – See more at: http://www.daily-sun.com/details_Construction-likely-to-begin-next-month_976_1_35_1_0.html#sthash.MzJfypJS.dpuf 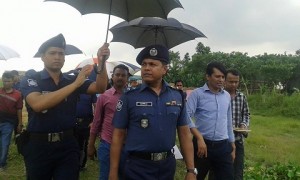