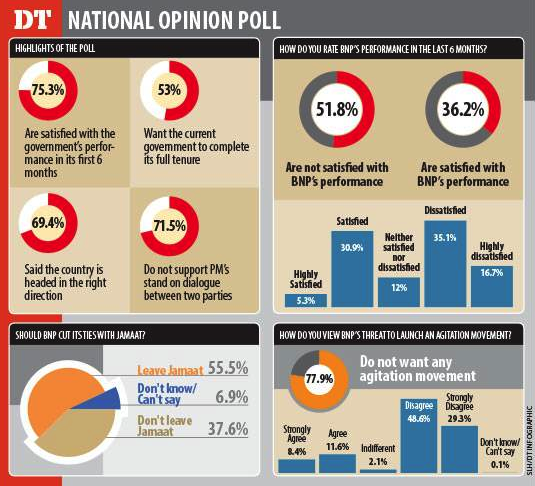 In a dramatic turn of public opinion, three-fourths of the population are more or less happy with the performance of the current government led by Sheikh Hasina which came to power through a one-sided election eight months ago.

A significant majority also believes that the country is heading in the right direction, according to a Dhaka Tribune opinion poll conducted last month.

A few months back in December, just before the parliamentary election, seven out of 10 people thought that the country was headed in the wrong direction.

However, no matter how satisfied the 75.3% respondents may be with the current government’s performance, an almost equal percentage (71.5%) do not support Prime Minister Sheikh Hasina’s stance about not sitting in a dialogue with the BNP.

On behalf of the Dhaka Tribune, polling company Innovative Research & Consultancy Ltd. conducted the survey between August10-22, in which a total of 1,217 were interviewed over phone using mostly structured questionnaires.

When asked what the most important issue for the government was right now, the responses were rather limited. Just over 21% said it was law and order, 16.2% said controlling price hike and 13.8% said retrieving democracy.

Interestingly, six months ago, holding a free and fair election and stopping hartal and violence were clearly the two biggest challenges for the government.

The respondents were aged 18 years or above, including both rural and urban men and women, spanning across all socio-economic classifications.

Around 53% said the next election should be held after this government completes its full term in office.

Nearly half of the respondents said infrastructure development was the biggest success of the government in its first six months.

However, there is not much to choose between the replies when asked what the biggest failure of the government was. The highest 17.7% said corruption, 16.7% said uncontrolled law and order situation, and 15.3% said price hike.

With a margin of error of 3%, the data collected is quantitative. The respondents were selected on the basis of multi-stage sampling. The sampling frame was the mobile users of the country and the current market share of the mobile phone service providers were used for sample distribution.

When asked about BNP’s threats about launching an agitation movement, nearly four-fifths of the respondents said they did not want any such movement at the moment.