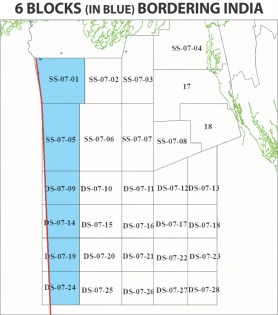 The resolution of the maritime boundary dispute is a pleasant surprise for Petrobangla as it will lose very little in terms of areas in six offshore oil and gas blocks bordering India in the western Bay of Bengal.

“We will go for international bidding as soon as possible. At the same time, we will see whether we can explore any of the offshore blocks on our own, as it does not cost much,” Petrobangla Chairman Hussain Monsur said while welcoming the verdict of United Nations Permanent Court of the Arbitration.

Another Petrobangla high official noted, “If the government is willing, we can go for the third-round offshore oil and gas exploration bid by the third quarter of next year.”

Out of six, two deep-sea blocks down south will need redesigning as their boundaries will require realignment by five to six kilometres each. The remaining four — including two shallow ones — will undergo minor changes, he said.

“However, to attract international oil companies in the deep seas, the government must tailor the bid terms and conditions in line with international practices — especially those followed in Myanmar.”

In 2008 and 2012, the government floated two separate block bids and only one American company, Conocophillips, is practically working in the deep seas upon signing a production sharing contract (PSC).

Both bids had failed to adequately attract bidders because of the maritime dispute with Myanmar — which was resolved in 2012 — and with India. In addition to uncertainty over the boundary, international oil companies were not very attracted by the incentives offered by Bangladesh.

Now with the whole dispute clearing up, oil companies will not have any worries to bid in Bangladeshi maritime blocks.

“The government now has some experience in dealing with one company Conocophillips [that signed PSC for deep sea blocks 10 and 11]. Conocophillips have met high officials several times and conveyed to the government that the government must change the existing format to have oil companies work in the deep-sea blocks,” the official noted.
Based on its seismic survey, the American company assessed that there was a prospect of a gas resources of 5 to 7 trillion cubic feet.

“However, the possibility of success to find this gas is just 17 percent. So investment here is highly risky,” said the official. The location of this prospect is around 350 kilometres away from the Chittagong coast.

In this light Conocophillips wants the government to amend the PSC and hike the gas price so that it proceeds with exploratory works.

“We actually have no idea about the dimension of investment required for deep sea exploration,” he added.

“If we don’t want foreign investment, it’s fine. But as we understand the subject, Bangladesh has no expertise or finances to tap this resource. Gas will stay where it is now,” the official pointed out.

Bogged down with a gas crisis of 500 million cubic feet a day (mmcfd), which is one fifth of the demand, Bangladesh has had hard luck finding any new major gas field since 1998 when the Bibiyana gas field was discovered. All follow up discoveries were inadequate to meet the spiralling demands.

This had prompted the government to go for off-shore exploration bids in 2008 and 2012. There were 28 blocks — each having exploration area of between 3,000 to 7,000 sq-km.
Side by side the government had taken the initiative to import liquefied natural gas (LNG) from the Middle East.

“If we are okay with paying $15 dollars per mmcfd LNG, why can’t we pay, say $10 to fetch gas directly from the deep sea through a pipeline? It’s all about mindset,” quips an expert.
Bangladesh had only one producing field in the shallow waters of the Bay, the Sangu field, which died two years back.

According to online energy magazine Geo Expro, from April 2009 India has been producing 2.1 billion cubic feet per day from different fields in Dhirubhai deep-water block in the Bay which has 25 trillion cubic feet (tcf) gas in place. This is located in Krishna-Godavari Basin — the midpoint of Bangladesh and Sri Lanka. Indian Reliance Industries is leading the discoveries.
This has virtually doubled India’s gas output. Other Indian discoveries in the Bay are closer to Bangladesh, having another 5 to 6 tcf gas.

Myanmar, on the other hand, discovered from 2003 to 2006 three gas fields totaling up to 6 tcf to 10 tcf gas in place in the Bay. The Korean company Daewoo made the breakthrough in these discoveries, following which all offshore western Myanmar blocks have been licensed to international companies, including CNOOC, CNPC, Daewoo Petroleum, and ONGC Videsh Ltd.