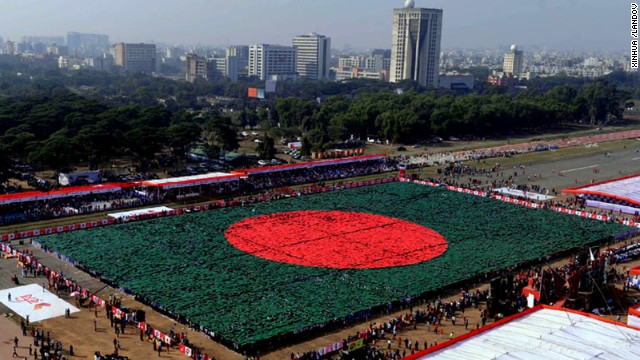 Dhaka (CNN) — Bangladesh has smashed a record set by Pakistan last year by forming the world’s largest human flag, Guinness World Records has confirmed.
Tens of thousands of Bangladeshi students and armed forces held up red and green colored placards in Dhaka’s National Parade Ground last month to create the huge Bangladeshi national symbol.
The formation broke a record set in October 2012, in Pakistan, when 24,000 people assembled a flag in the city of Lahore.
On December 16, a total of 27,117 people held the flag together for at least five minutes, following instructions provided by Guinness World Records.
"This is the first time our nation is breaking a record like this with Pakistan," said Akhika Akhtar, a 17-year-old student who heard about the event from her professors.
The date was chosen to celebrate Bangladesh’s Victory Day, according to an event organizer, Toffael Rashid.
Victory Day commemorates the day Bangladesh officially gained independence from Pakistan on December 16, 1971, after a nine-month war that left between 1 million and 3 million people dead.
An accounting firm oversaw the record-breaking attempt and submitted materials to Guinness World Records, which verified the record.