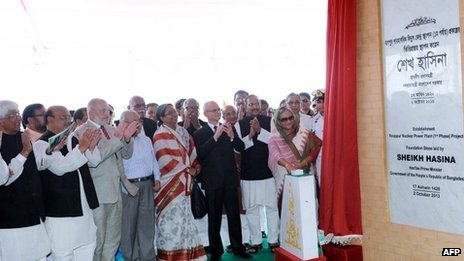 The plants – each with a capacity of 1,000 megawatts – are being constructed with Russian help as Bangladesh looks to close a yawning power deficit.

Inaugurating the project, PM Sheikh Hasina said that “utmost priority” would be given to nuclear safety”.

The $2bn project is funded by $500m of Russian credit and is expected to be fully completed by 2022.

Prime Minister Hasina said the plant would be constructed so that natural disasters could not damage or destroy it.

“Regarding the design of the plant, we are following the guidelines of the International Atomic Energy Agency,” she said.

Under the terms of the construction deal, Russia’s state-run Rosatom nuclear energy corporation will build, operate and provide fuel for the plant in addition to processing its spent fuel in Russia.

Correspondents say that the project is part of an export drive backed by Russian President Vladimir Putin that includes Rosatom building plants in Iran and Turkey.

The reactors at Rooppur in Pabna district, 120km (75 miles) north of Dhaka, are expected to operate for 60 years with options to extend by another 20 years.

Erratic electricity supplies have been blamed for hampering industrial production and economic growth.

WB to provide $2b to Bangladesh for fighting climate change