Bangladesh ranks among the last 10 countries in terms of web index, a survey conducted by the World Wide Web Foundation to determine the nations using internet effectively to change lifestyle of their people said.   Designed and produced by the Foundation, the web Index is the world’s first multi-dimensional measure of the web’s growth, utility and impact on people and nations.
In its recent survey, the foundation covered 61 developed and developing countries including Bangladesh, incorporating indicators that assess the political, economic and social impact of the web, as well as indicators of web connectivity and infrastructure.
Bangladesh ranked 55th among 61 countries.
Sweden tops the list for overall impact of the web,  taking first place for political, second place for social and third place for Economic impact. The next four countries are–USA, UK, Canada and Finland respectively.
The five countries ranking at the bottom are respectively –Yemen, Zimbabwe, Burkina Faso, Benin and Ethiopia.
About the recent survey, Mahbub Jaman, president of Bangladesh Association of Software and Information Service (BASIS) said that internet penetration rate in the country hasn’t increased significantly as the government still impose 15 per cent VAT on Internet usage.
“It’s ironic that people have to pay 15 per cent VAT on Internet usage while they pay 1.5 per cent VAT on gold purchase. Internet is more expensive than gold,” Zaman said adding that Bangladesh has the lowest Internet penetration rate among the South Asian nations.
He also said the government only allocated a mere 0.397 per cent budgetary allocation for the development of the information and communication sector. In the budget for 2012-13, the government didn’t even give any block allocation in its annual development plan (ADP) for the ICT sector, he added.
FM Rashid Amin, joint secretary general of the Internet Service Provider Association (ISPA) said, only 30 per cent of the 2 crore internet users of the country are using internet provided by the ISPs.
“Internet usage in Bangladesh is mostly mobile phone based. It is hard for us to operate lucratively in this small market. Currently, only 50 ISPs are operational now as the others couldn’t sustain the heavy losses”, he said.
Bangladesh Telecommu-nication Regulatory Commission (BTRC) chairman Maj Gen Zia Ahmed however said that internet usage in Bangladesh is making a steady progress. “Five years back, there were less than 20 lakh subscribers. Now there are more than 2 crore subscribers”, he said.
The chairman also said that the telecom regulator has reduced the price of bandwidth for four times in last two years. “To ensure faster line at the subscriber’s end, we have also fixed the condition ratio for the ISPs at 1:20, which means, a maximum of 20 lines could be distributed per Mbps bandwidth”, he said. 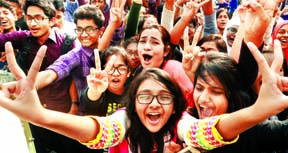 Bangladesh stops open defecation in just over a decade