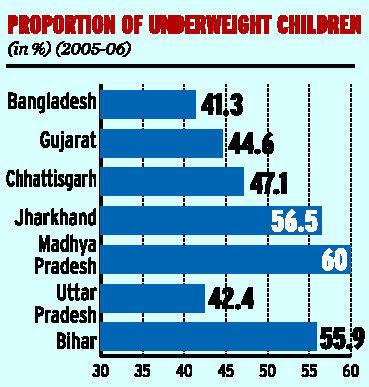 Bangladesh is very much in the news these days in our country, but for the wrong reasons. In the unfortunate Bangladesh-bashing that seems to have become somewhat of a pastime, we seem to have failed to notice the striking developmental success that it has had in the last few decades, compared with some high-profile Indian States.

Consider this. Bangladesh is considerably “poorer” than India going by GDP alone — its GDP per capita (adjusted for purchasing power parity) in 2010 was only $1,585, roughly half of India’s ($3,419) and less than a third of Gujarat’s ($5,098) and Haryana’s ($5,434). But how is Bangladesh doing on social dimensions compared to some of our “richer” States?

Let us start with the status of children. In almost every standard indicator of child development, Bangladesh is doing better than some of the richer Indian States.

The proportion of children that are underweight is also lower in Bangladesh compared to six Indian States, including richer Gujarat where the Chief Minister has now come up with a truly bizarre explanation for the prevalence of malnutrition there.

Interestingly, Bangladesh’s Total Fertility Rate, which measures the children born per woman, is 2.2 (which is nearly the “replacement rate”) and lower than 10 large Indian States, including Gujarat (2.5) and Haryana (2.3). Even when it comes to access to improved sanitation, Bangladesh again does better than every large Indian State other than Kerala, Punjab, Himachal Pradesh and West Bengal.

What does all this data tell us? Clearly, Bangladesh demonstrates that it is possible to have superior social outcomes at lower per capita incomes and lower rates of economic growth. There is more to social development than just GDP. So why has Bangladesh done so well?
Two arguments

Let us first examine the arguments of the naysayers. One set of sceptics would argue that Bangladesh simply “exports its poverty” to India, especially to our Northeast. But even if one believes the most exaggerated statistics of Bangladeshi migration to India, not more than five to six per cent of Bangladeshis seek their livelihoods in our country.

The second argument of the naysayers is that Bangladesh’s data is fudged or exaggerated by the donor community to justify its larger than life presence in the country. However, doctoring national data at such scale is simply not possible in today’s day and age of scrutiny by academics, researchers and sceptics.

So how might have Bangladesh done it? Spending has something to do with it. As Jean Drèze has argued, the public health expenditure as a proportion of the GDP in Bangladesh has been much higher than in India until a few years ago.

Another clear lesson is that grassroot institutions seem to matter. One of the major reasons for the success of Bangladesh has been social mobilisation at the local level, such as through women’s self-help groups (SHG), which has led to increased public awareness and greater accountability in service delivery. A lot of this has been facilitated by robust and effective development NGOs that have achieved scale — in fact, Bangladesh is perhaps the best case study of NGO success anywhere in the world. As scholars have argued, NGOs are involved at scale in virtually every development activity in the country, including education, health, poverty alleviation, etc. NGOs may have “broad-based” social development in Bangladesh, as some have argued, since they have primarily worked with the poor through social campaigns, but this phenomenon may be unique to Bangladesh, as state institutions may be weaker, as compared to countries like India, and NGOs may be filling up that space.

Nevertheless, there are lessons for India — effective grassroot institutions matter for service delivery. In the Indian context, financially and administratively empowering the Panchayati Raj institutions, with their 2,50,000 gram panchayats, and 30 lakh elected representatives (of which 12 lakh are women) is critical. This is not happening on any significant scale. Similarly, the 30 lakh women’s SHGs (that we hope to increase to 70 lakh in the next five years through the National Rural Livelihoods Mission — Aajeevika), could play a major role in improving social outcomes. But for this to happen, we will need to ensure that these SHGs are linked to banks and involved in service delivery, as in Andhra Pradesh.
Enhancing connectivity

Currently, 80 per cent of all credit to SHGs goes to the four southern States of India — Andhra Pradesh, Tamil Nadu, Karnataka and Kerala — and this needs to be broad-based nationally. In addition, we need to enhance rural connectivity — the Pradhan Mantri Gram Sadak Yojna (PMGSY), a major success in connecting habitations above 500 population with pucca roads, needs to scaled up to connect smaller habitations. Sanitation and hygiene have to undergo a veritable revolution, given their multiplier effects on reducing child mortality and malnutrition, enhancing economic productivity, and upholding the dignity of women.

Clearly we must not settle for lower GDP growth rates in India. Indeed, the data shows that there is a clear positive correlation between GDP and social development indicators. More importantly, continued high rates of GDP growth are required for generating resources to invest in health and education, and sustaining the investments on the required scale.

But what Bangladesh’s experience shows is that we don’t have to wait for that high economic growth to trigger social transformations. Robust grassroot institutions can achieve much that money can’t buy.