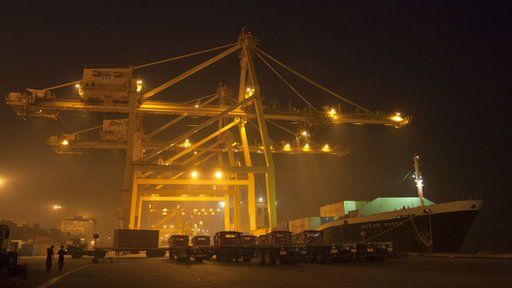 Bangladesh has become a global leader in clothing exports in recent years. One of the reasons attributed to this success story is the main Chittagong port in the south of the country.

Chittagong port handles more than 80% of the country’s imports and exports making it the prime port of Bangladesh.

Situated on the Karnaphuli river, close to the Bay of Bengal, Chittagong port is described as the lifeline of the Bangladeshi economy.

Today, the country’s main export items such as clothes, leather goods, jute, tea and frozen foods are taken through this port to the outside world. Last year it handled more than $60bn (£38bn) worth of foreign trade.

Experts say Chittagong port, which celebrated its 125th founding anniversary this year, can become a regional economic hub if the facilities are modernised.

“It has been the gateway to our economic growth. But the load on the port is increasing day by day. If we don’t develop and upgrade the port, Bangladesh will miss out on meeting the increasing internal demand,” says Prof Syed Ahsanul Alam of Chittagong University.

Last year Bangladesh exported more than $19bn worth of ready made clothes, mostly to the European Union and the United States and most of the shipments were sent through this port.

With global consultancy firms such as McKinsey predicting that Bangladesh can double its garments exports in the next 10 years, the necessity to modernise the port has become more urgent than ever.

A few years ago, the port faced a series of problems including worker unrest. As a result, serious congestion occurred and the average turnaround time for ships went up from two days to seven days.

Soon after, the authorities took a series of steps to improve the efficiency of the port, including allowing private berth operators to handle containers and cargo.

Last year, the port handled more than 47 million tonnes of cargo and containers of 1.4 million TEUs (20ft equivalent units). As the Bangladeshi economy has witnessed growth of about 6% for the last few years, the trade volume is also gradually increasing.

Though the average turnaround time for ships has been brought down to about two-and-a-half days at the moment, exporters say it should come down further, meeting global standards. For example, the turnaround time in Singapore port is less than 12 hours.

“Time is money. If I can take my delivery within a day or a few hours, it would save me a lot of time and money. The lead time for ships should be reduced,” says Nasir Uddin Chowdhury, first vice-president of the Bangladesh Garment Manufacturers and Exporters Association (BGMEA).

“The services have improved but they should install modern equipment and apply good management systems to meet increasing local demand.”

But port officials point to improvements in the last few years which have augmented the efficiency of the port. They also point out that there has been no major labour unrest after the berthing operations were privatised.
Countries including Nepal, Bhutan and India want to use Chittagong port to transport cargo

“To improve the capacity, we have introduced a numeric container terminal, which will operate from early next year. Once it’s operational, the volume of containers we handle will double,” Rear Admiral Nizamuddin Ahmed, chairman of the Chittagong Port Authority told the BBC.

Officials are confident that once the expansion plan is complete it will double the capacity of the port so that it can host at least 12 container vessels at any given time.

There are other opportunities knocking at the door of Chittagong port. It is strategically located close to Burma, China, India, while landlocked neighbours Nepal and Bhutan want to use the port to transport cargo to their countries.

Besides these two countries, the emerging economic giant India also wants access to Chittagong port to send goods to its seven north-eastern states.

If the transit agreements between Bangladesh and neighbouring countries are finalised, then Chittagong port has the potential to become a regional business hub. In addition, Dhaka can earn millions of dollars in revenue by leasing its port facilities to other countries.

But this level of demand may not last. Neighbouring Burma is upgrading its deepwater port in Sittwe, about 200km south of Chittagong. The port is being upgraded with Indian assistance.
Chittagong port faces tough competition from upcoming deep sea ports

Experts say once completed, the Burmese port may have an impact on the shipping revenues of Bangladesh as India is likely to transport its cargo through the port to its north-eastern states.

“The deep sea port Burma is building at Sittwe will definitely take away the bigger portion of the cake. It will start catering to the regional demand,” says Prof Alam.

“With the completion of the port, Burma will definitely go up and it will influence this entire region.”

Since Chittagong is a river port, huge container ships more than 617ft (188m0 long cannot pass through the narrow Karnapuli river. Normally, transhipment of containers takes place either in Singapore or in other big regional ports.

Realising the need for a deep sea port in the future, Bangladesh is also planning a port on Sonadia Island in the Bay of Bengal, south of Chittagong. It has already approached China for assistance to build this multi-billion dollar deep sea port.

When finished, the Sonadia port is expected to cater to the growing business needs of Bangladesh, as well as China and India.

But it will take years before the new port can be completed and made operational. Until then, Bangladesh’s economic hopes are tied to the fate of Chittagong port.