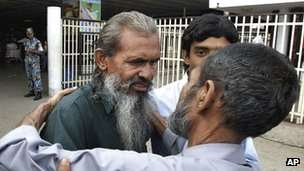 Moslemuddin Sarkar, 52, arrived back in Dhaka on Tuesday, a day after being freed from a Pakistani jail with the help of the Red Cross.

His family lost contact after Mr Sarkar left for India in search of work in 1989. Years later, he ended up in Pakistan, where he was arrested.

He says he was beaten and tortured in his subsequent 15 years in prison.

“I requested that embassy officials send me back to Bangladesh but no one listened to me,” he told the BBC.

“I suffered a lot in the prison and was crying for help. But no-one came to my rescue. Still I don’t understand why I was kept in jail for such a long time. At last, I am back with my family and I feel great.”
‘Heartbreaking’

There were emotional scenes when Mr Sarkar was welcomed by relatives at Dhaka airport, the BBC’s Anbarasan Ethirajan reports from Bangladesh.

A younger brother, Julhas Uddin, told the AFP news agency that Mr Sarkar’s mother “passed out as he hugged her” after returning to his home village.

“It was a heartbreaking scene. He could not control his tears for hours,” Julhas Uddin said.

A dockworker at the port of Chittagong, Mr Sarkar says he illegally crossed the border to India in 1989 in search of better opportunities, without telling his family.

“We searched for him for years and finally gave up hope believing he might have drowned in the sea. But our mother always believed that her son would return home one day,” Julhas Uddin said.

In 1997, he was caught trying to enter Pakistan without valid travel documents, spending the next 15 years in prisons in Lahore and Karachi. He told the BBC he was completely cut off from the world during that time.

“I went to Pakistan believing that I would get a better job there. But they caught me at the border,” he told AFP. “I wrote dozens of letters to my village address, but did not have any clue that they were never posted. At one stage I lost all hope of returning home.”

His fate reportedly came to light when Pakistan sent a list of long-serving Bangladeshi prisoners to consular officials, who informed Mr Sarkar’s family. They in turn appealed to the International Committee of the Red Cross, who facilitated his release.