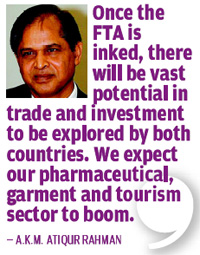 Malaysia and Bangladesh are expected to commence negotiations for a proposed free trade agreement (FTA) in the near future, said Bangladesh High Commissioner to Malaysia, A.K.M. Atiqur Rahman.

He said the Bangladeshi government had submitted a proposal to the International Trade and Industry Ministry and talks could begin once the Malaysian government gave its feedback on the proposal.

“The FTA talks is expected to start once Malaysian counterparts respond to our proposal.

“On when it would be finalised, we do not know. But the important issue is that the talks must start soon,” he said at a media briefing in conjunction with the upcoming Showcase Bangladesh 2012 yesterday.

He said that in 2010, International Trade and Industry Minister Datuk Seri Mustapa Mohamed and the then Bangladesh Minister of Commerce, Muhammad Faruk Khan had verbally agreed on the talks to commence.

“We took two years to work on the proposal and we have presented it to the Malaysian government.

“Once the FTA is inked, there will be vast potential in trade and investment areas to be explored by both countries. We expect our pharmaceutical, garment and tourism sector to boom,” Atiqur said.

He said Malaysia had and would benefit immensely from infrastructure projects dished out by the Bangladeshi government, as part of its redeveloping efforts.

Under the supervision of the Special Envoy (Infrastructure) to India and South-East Asia, Datuk Seri S.Samy Vellu, Atiqur said the investment relationship between the two countries had scaled greater heights.

“Malaysia will undertake the Padma Multipurpose Bridge worth US$3bil and it has been reported that Malaysia has submitted a proposal to build the Bangabandhu International Airport with an investment of between US$5bil and US$6bil,” he added. — Bernama