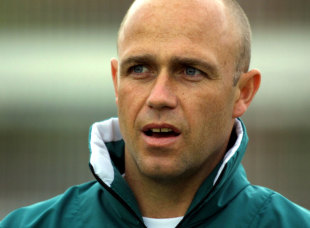 Richard Pybus, the former Pakistan coach, has been named Bangladesh coach, taking over from Stuart Law who resigned in April. Pybus, 47, has signed a two-year deal with the BCB and is expected to join the Bangladesh side before their tour of Zimbabwe next month.

Pybus’ appointment came more than two weeks after a brief reconnaissance visit to Bangladesh and after the grapevine linked other names to the job. However, he was always seen as the leading contender despite his last job as an international coach ending nine years ago.

“I am delighted at the opportunity of coaching Bangladesh,” Pybus said. “I am looking forward to getting busy with the boys.

“We have an active schedule ahead of us and for me the next few months will be about building relationships with the players and the coaching staff and ensuring that the progress made up to the Asia Cup continues.”

BCB president AHM Mustafa Kamal said Pybus was the best option. “Pybus will join us in a few days. We have requested him to come before we go abroad, to get acquainted with the players,” Kamal said. “He was our best option, among all those we have talked to this time. Take a look at their records and his, there is a sharp difference between him and others. I think he has a proven track record, it speaks for itself.”

Pybus hasn’t been in charge of an international side since his Pakistan stint ended in 2003 but had flown to Bangladesh earlier this month to interview for the national coach’s role. He will be Bangladesh’s third coach in a year as Law had been in the post for only nine months after succeeding another Australian Jamie Siddons last July.

He will be expected to take charge of a mercurial side brimming with talent and with some success in the recent past. Some in the cricket board have suggested that the Bangladesh team no longer needs a coach specialising in the development of batting but a man who is adept in man-management at the top level.

Pybus arrived in Dhaka on May 10 and spent the subsequent day holding meetings with BCB president AHM Mustafa Kamal as well as some of the board directors and a handful of national players. It wasn’t deemed as a job interview as Kamal had insisted that Pybus was their only choice.

Since Pybus made the short trip to Bangladesh, it was all but confirmed that it will be the South Africa-based coach who will take over from Law. But negotiations were ongoing and while the two parties spoke, the BCB continued to talk to the other coaches in their shortlist — Mick Newell, Mark Greatbatch and Kepler Wessels.

Thanks to Prime Minister