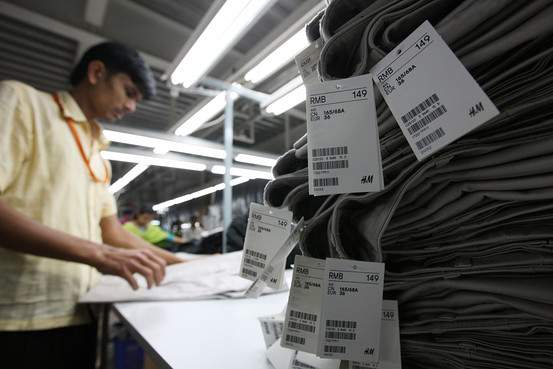 Price tags are seen on clothing for Hennes & Mauritz (H&M) at the Talisman garment factory in Dhaka, Bangladesh. The Swedish fashion retailer said unrest and violent strikes present a big hurdle to expansion in Bangladesh.

“The often-recurring strikes and demonstrations disrupt production and cause delays. We want to grow in Bangladesh.…A stable market will benefit us buyers, the suppliers and the workers,” said H&M’s head of sustainability, Helena Helmersson.

About 25% of H&M’s products are made in Bangladesh and the company, the world’s second-largest clothing retailer, aims to increase that figure.

Fashion accounts for about 80% of Bangladesh’s exports and employs about three million people. Consulting firm McKinsey & Co. expects Bangladesh’s apparel exports to double by 2015 and triple in 10 years, with big buyers moving from China as capacity constraints and wage inflation decrease profits.

But the country has been plagued by political turmoil, with violent street protests erupting last month following the disappearance of a leading opposition figure. Working conditions remain poor, with substandard lighting, overcrowding and long working hours. In 2010, 21 workers were killed in a fire at a factory making products for H&M and other retailers.

Apparel workers have no real collective power in Bangladesh. “The situation is highly fragmented,” Ms. Helmersson said. “There are about 56 garment and textile workers’ unions.”

H&M said it aims to use its influence to apply pressure on its suppliers in Bangladesh to improve working conditions. The company last year held talks with government representatives, unions and the biggest suppliers about H&M’s expansion plans.

“We told them how we would like to grow in Bangladesh, but that the ongoing instability in the country makes it difficult for us to plan production and makes us wonder if we dare grow there,” Ms. Helmersson said. H&M wants suppliers to set up democratic labor committees that can negotiate wages and working conditions with factory owners, and a program will be rolled out and tested this year and next, she said.

“We are big buyers in Bangladesh and we want to take greater responsibility for working conditions there,” Chief Executive Karl-Johan Persson said. “And we reward the suppliers who take the greater social responsibility with more business, larger orders and longer contract.”