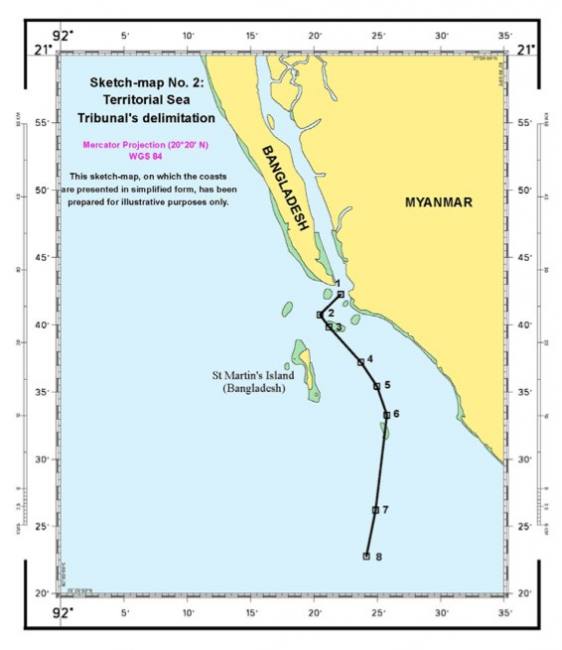 Bangladesh won a great victory in the maritime boundary case with Burma in the International Tribunal for the Law of the Sea (ITLOS) as it delivered the judgment in Homburg today, according to ITLOS website and United News of Bangladesh (UNB).

“We’ve got more than what we wanted,” Foreign Minister Dipu Moni who is the representative or agent of Bangladesh for the case No.16.

She said, “It is not only a victory, but a tremendous victory.”

Judge José Luis Jesus, who is presiding over the case at the Tribunal, began reading out the judgment at 5pm (BST) at its main courtroom in Hamburg, Germany according to broadcast live on the ITLOS website.

H.E. Mr Tun Shin,the representative or agent of Burma in the court

The tribunal has 21 regular judges from various countries. Bangladesh and Burma have nominated one judge each, taking the total number of judges to 23. Thomas Mensah has been chosen by Bangladesh while Burma has chosen Bernard Oxman.

H.E. Mr Tun Shin, Attorney General, the representative or agent of Burma for the case of No. 16.

The ITLOS is an independent judicial body, established by the United Nations Convention on the Law of the Sea. Its verdict is crucial not only for determining the country’s sea boundary, but also for ensuring legitimate right over sea resources, a senior official of the Ministry of Foreign Affairs (MoFA) said.

Foreign Minister Dipu Moni, the representative or agent of Bangladesh for the case No.16

The tribunal will decide if Bangladesh would have to limit its access to 130 nautical mile sea area or it would have 200 nautical mile economic exploitation zone (EEZ) and continental shelf that extends up to 400-460 NM (850km) southwards from its coastline.

Continental shelf is the extended perimeter of each continent and associated coastal plain. The dispute with India over a similar issue would be settled by 2014.

The judgment of the tribunal is final and mandatory as there is no opportunity for any party to appeal.

The dispute over the maritime delimitation between the countries began when Bangladesh tried exploring gas reserves in the Bay. While Dhaka demands “equitable” method to settle the dispute, both India and Myanmar push for the “equidistance” principle.

Bangladesh’s interests could be hampered if the delimitation takes place based on equidistance principle, as it might end up forgoing its claim over 17 out of 28 sea blocks.

The verdict put an end to a protracted legal battle of more than two years.

Bangladesh has never explored hydrocarbon in the offshore deep water gas-blocks in the Bay of Bengal.

The Petrobangla in February 2008 offered a total of 28 offshore gas-blocks, of which eight were in shallow depth and 20 in deep water. But it received a lukewarm response due to negative propaganda over the maritime boundary by the neighboring India and Burma.